We had about twelve more large quince to deal with from the tree. Noel requested quince jelly, so I decided to make the juice today. Here's the canning pot filled up with quartered quince (and a couple small Jonathan apples that I threw in for flavour). 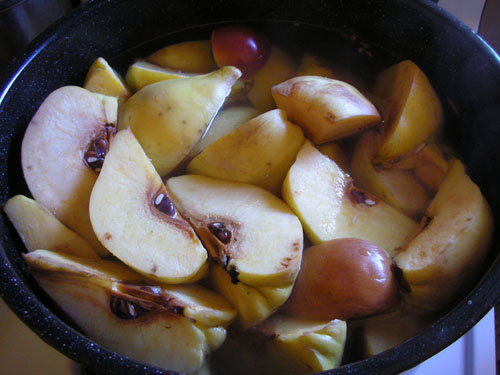 I tried something I need to work on in more detail later: I put the pot full of quince in the oven for half an hour at 350F to get it started on breaking down, then added water and put it on the stove. I think I could have roasted them for longer, as with the marmelada, and it would have been more successful. Anyway, I don't have any more quince to experiment with this year, and I'm certainly not going to buy any, but I'm making notes on what I want to try next year.

To make quince jelly you simmer the fruit until it breaks down into a mush. My metric is that I should be able to break the fruit apart with a wooden spoon without really working hard. That was about an hour of simmering, on top of the half hour of roasting. You don't want to cook it too fast or you'll break down the pectin. 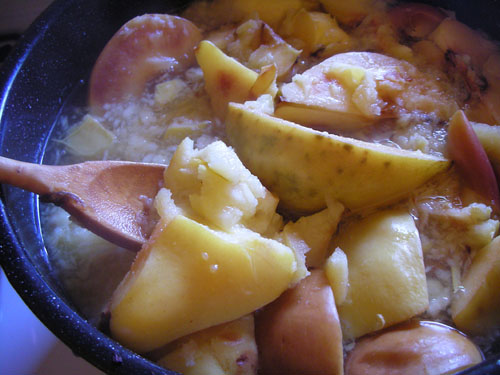 When you've got the quince nicely cooked, it starts to resemble a really nasty applesauce with seeds and cores in it. The next time I do this I will put it through the food mill at this stage and maybe come up with something to do with a giant pile of quince sauce. I think the juice will be better from a milled sauce. 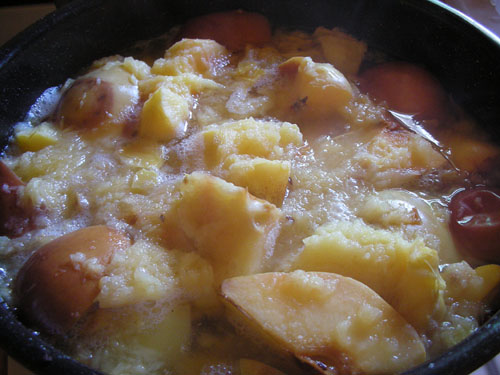 Here's my jelly bag setup: a nice strong muslin pillowcase-cum-jelly bag (my desire is to buy a real jelly bag sometime in the future, possibly more than one if I'm going to be making this much juice at once), hung by wires from the pot hooks over the sink, set up to drip into the washed-out canning pot. The collander is there in case the bag falls, to keep it from going ker-splash into the juice. 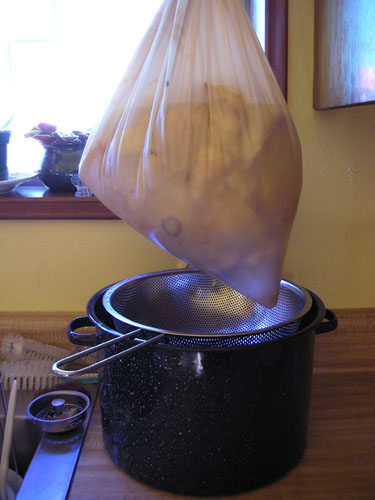 I leave the jelly bag to drip for 24 hours. Tomorrow evening, Noel will dump the remains in the compost bin (these fruit remains are AMAZING on the compost), then bottle up the juice for me to turn into jelly the next time I have a free afternoon. Which would be in, oh, January.

Now I Have to Actually Work on This Thing

OK, so the slightly scary lace tinkering went well -- better than I might have expected.

I give you: lace, repaired, and back on the needles

I ended up having to pull back four rows, which is not too terribly bad. Also, I found a place where I'd failed to yarnover properly, and fixed that.

Here it is this morning, dry and crisp. I started to peel it off the floor before realizing that hey, that stuck-to-the-floorness could be useful. And so it was. 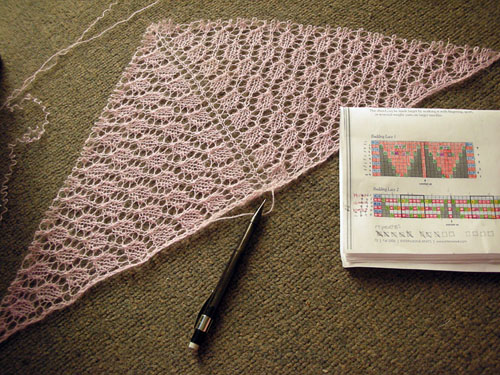 I pulled back my rows carefully, counting stitches and following along on the chart. If you decide to do this you really should take copious notes.

My only real snag was when I realized that all my other needles were up at home, but I resolved that by using a piece of sewing thread and an embroidery needle. Here we are all strung up. 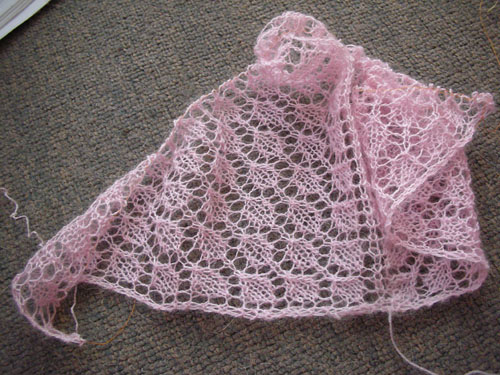 Not too much raveled yarn, thank goodness. Also, while the Misti Alpaca usually ravels very poorly, sticking to itself and not wanting to come apart, once it's been starched the fibers keep to themselves more, and it was much easier to handle. Almost makes me want to starch the stuff before I knit with it in the first place. Almost. 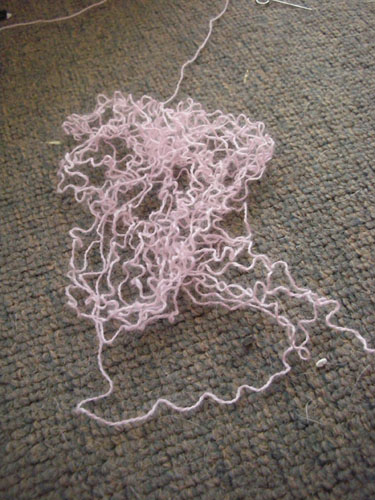 So I made a mistake a couple of rows back in my lace shawl, noted and set aside for more time until after the midreview last week -- if I try to do delicate repairs while in the middle of a big project I'm likely to get stupid, and making the mistake in the first place was stupid enough (knitting lace in the dark while drinking).

Anyway. The fix. I did some web searching and thinking on the subject, rather than my usual impulsive tear-the-whole-thing-back approach, or even worse, the try-to-fix-blindly approach. My knitting mistakes have largely been about fit in the past, rather than about, um, k1 instead of k2tog, so this called for a different approach. I found this tutorial and decided to go for it. 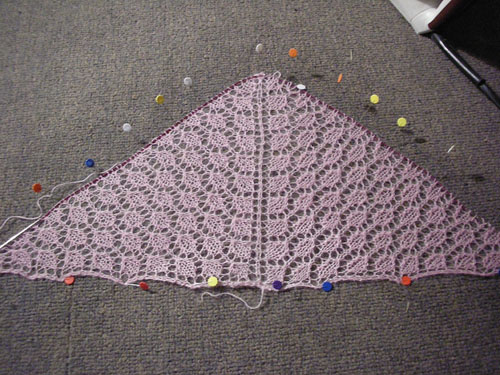 Here's the lace shawl, pinned out, steamed, and sprayed within an inch of its life with regular-hold spray starch. I forgot how spray starch smells like my grandmother's hair. I'm pretty sure she didn't, you know, actually use the stuff as "product," but is there some kind of old-lady hair spray that smells like that? Weird.

Some additional photos: here's where I, while trying to figure out just what I'd done, managed to drop five or six stitches, including a couple of yarnovers. Nice, huh?. Rather than try to sort it out right away, I picked them up on a pin and pinned them out. 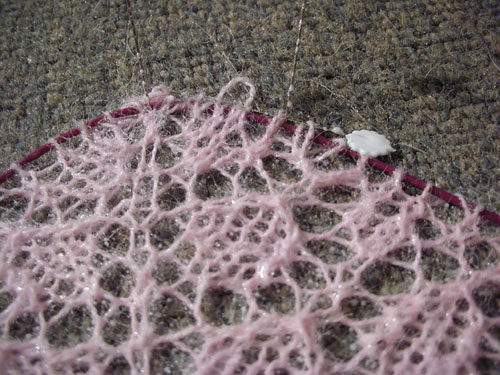 One thing the tutorial doesn't mention is that the pins and the circular needle are both going to need a thorough bath after being coated with starch. 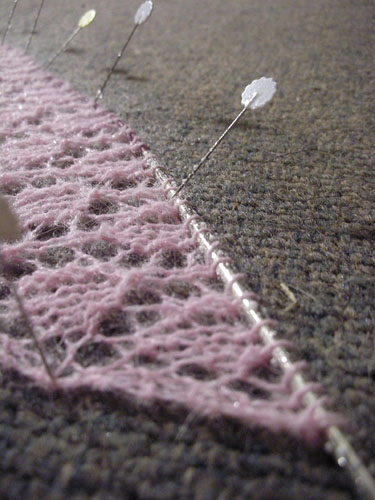 It's still drying; I'll probably let it dry overnight rather than push it and end up with a massive sticky mess. I have plenty of work to do on this stupid section drawing.

Anyway, I have learned my lesson and as soon as I'm back on track here I'll be inserting a lifeline to fall back on should I do this again.

What have I been doing for the last three weeks? Making this: 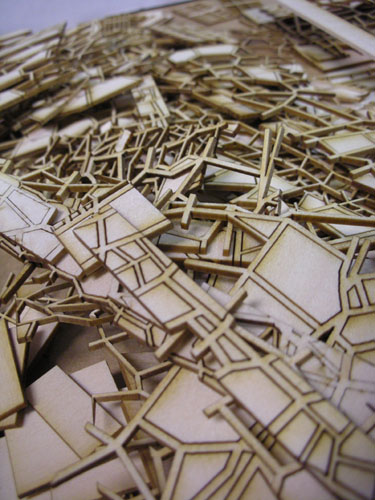 Well, then taking that and making it into this: 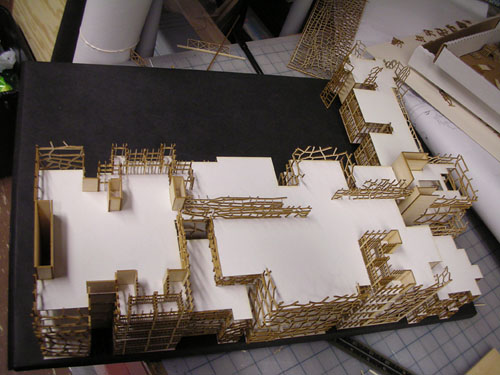 This is the surgical clinic portion of my research center: a surgery, patient rooms, physical therapy, so forth. There's also a two-story wing that extends over a nearby building for psychological therapy rooms and other forms of non-invasive work.

The building is designed as a series of modules connected by a scaffold of collaborative workspaces. Sometimes the modules are used as offices, sometimes as patient rooms, exam rooms, or for other functions.

As the building rises, it pulls back and creates wells of light that penetrate the fairly wide building (another building in the center is much wider than this, but has a particular reason for blocking light from its center). 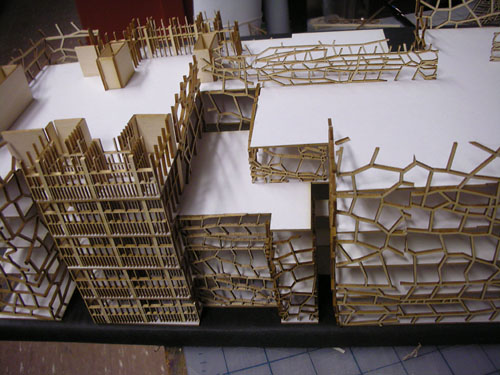 This is the part I'm not sure about in the model: I wanted the scaffold to rise up around this section of the building, but it's just not working as designed. 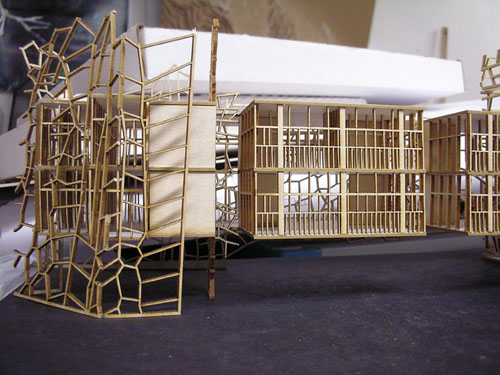 Fortunately, in two hours, our mid-term review begins, complete with Big Name Architecture Critic in town for a lecture, who will be tearing us to pieces.

I have four more weeks of work left.