I started knitting the Swallowtail Shawl from Interweave Knits right before vacation, thinking it would be a great island knitting project. I had been planning to make this because a couple of years ago I impulse-bought a single ball of Misti Alpaca, and that was never quite enough for a project, or else it was way too much. So when I saw this pattern (which calls for a single ball of Misti Alpaca), I set the yarn and pattern together with the plan of working on it when I had a week or two of vacation time.

Maine seemed like the perfect time. Of course, I failed to remember just how dark it is without electric lighting, and so the few repeats of the lace pattern I managed are a trifle sloppy (it'll work out in blocking, of course, but I'm kind of a perfectionist), and I eventually gave up.

On the other hand, I've been able to work on it while cogitating on the subject of exterior walkways this week, and knitting doesn't seem to bother my left shoulder, which is in angry protest of all the jellying and marmelada-making of the last week. So I've made some decent progress. 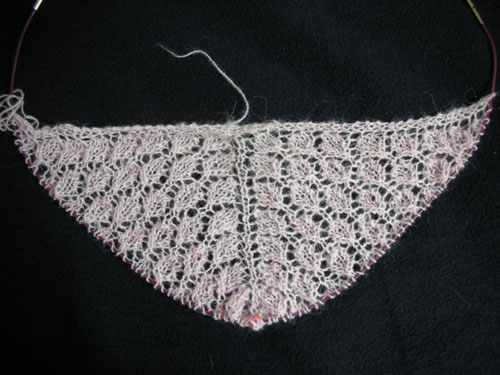 That's six of fourteen repeats for the body pattern. The lace pattern is, as others blogging about it have noted, easy to learn well enough that you don't need to be obsessing over the chart. But it does require more of my attention than making, say, a sweater usually does (because I have yet to make a lace sweater, I suppose).

And here's the lace pattern up close. 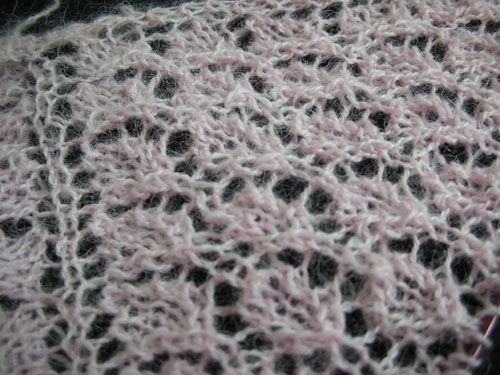 Paste of the Quince that Hit You

Noel and I spent two days making a giant pile of quince paste. This is not recommended as a regular activity, unless you want to build really burly arms. I will describe the process in less than perfect detail:

Wash and dry quince, then roast in covered pans for an hour and a half or so. Here we have two of our three roasting pans of quince. Num. 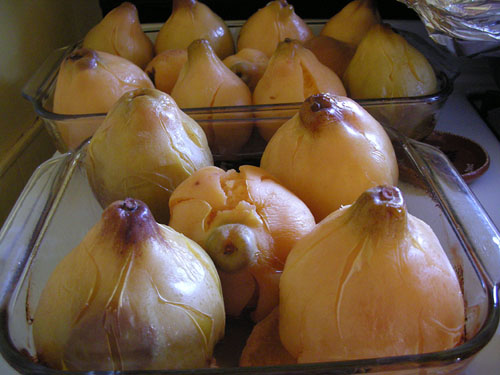 The other option is to peel and core the quince then boil the heck out of them, but that seemed like a lot of work. Once the quince were roasted, peeling was basically irrelevant, though you can still peel them if you want, and coring was easy.

Then we put the chunks in the Cuisinart and processed the heck out of them. No simple chopping here; I let the blades turn that stuff into mush. You could not tell where the skin had been. I love that machine.

The recipe we had suggested using a food mill. This is crazy-talk. There is no need for a food mill when you have electricity and a Cuisinart. And you're about to work out enough with the stirring.

Then you measure the paste, add its equal volume of sugar, and boil this on the stove for, like, four hundred hours while stirring constantly and dodging spatters of hot quince paste, as your arms slowly lose feeling and grip strength and soon you are not sure you wanted arms to begin with and what would it take to design a little stirring robot that could do this for you? (I want this stirring robot BAD.)

Noel did all the stirring, thank goodness. You stir the stuff until it's lost about half its volume and is coming together as a solid. This is why we used the roasted quince method. The more water, the longer the stirring. We worked from waterless quince mush and each batch took about an hour or more to cook down. Can you imagine with water?

When it's nice and thick, you pour it into a mold (we used oiled roasting pans and non-stick cupcake tins; both worked fine, though if you plan to give the finished product as a gift go with a cupcake mold for nice-sized cakes, maybe even shaped cupcakes if you're feeling fancy) and let it cool. Then you cover it with plastic wrap and chill it overnight in the fridge, to get any last thoughts of escape out of it.

The next day you can use a spatula to encourage the stick cakes to flobble out on the counter, where you catch them and wrap them firmly in plastic then stuff them back in the fridge for storage. 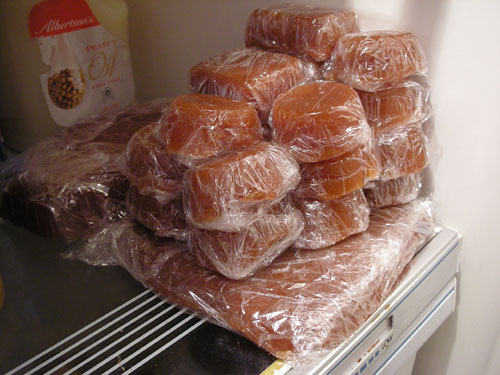 This stuff keeps for MONTHS, although it is tasty enough that it may not last that long. We have a big loaf we're planning to take to a party on Saturday; there will not likely be any leftovers.

Next up: Asian Pear jelly, because we had a bunch of windfall fruit come down unripe. Perfect for jelly-making!

Highlights from the Trip

We got home yesterday afternoon, a bit frazzled and very tired. The last two days of driving we decided to take it a bit easier on ourselves and get more sleep.

I think we took about 300 photos (a lot given that this was not really a sight-seeing trip), so I'm distilling them here to something more manageable. There are still a lot of photos after the cut.

I'll skip highlights from the drive out to Maine, as those are in a previous post.

First, here's where we stayed: a cottage belonging to our friend George on a little island in Megunticook Lake, outside of Camden, Maine. The cottage has a minimal septic system and no electricity. You reach it by rowing out in a canoe or rowboat. 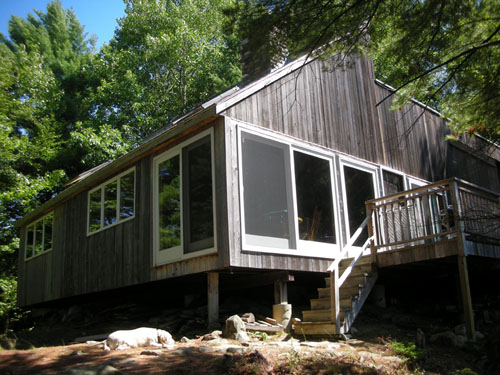 The events of the second day on the island began with the exciting transport of a new Victrola, this one with better sound than the one already on the island. Of course, transporting the Victrola meant putting it in a rowboat. 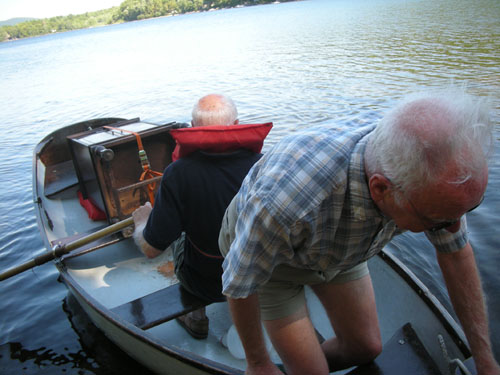 When the new model was installed (it is the smaller cabinet in this photo), the two Victrolas were compared and contrasted, some adjustments were made, and then a grand sorting of the Victrola records was undertaken, with many being carried off to be bound into albums. 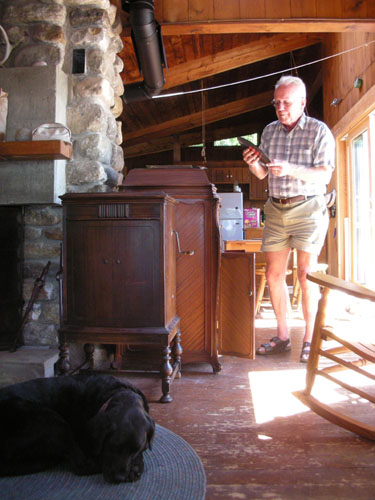 Later that day, the party set off on an epic march up to Maiden Cliff, overlooking the lake. 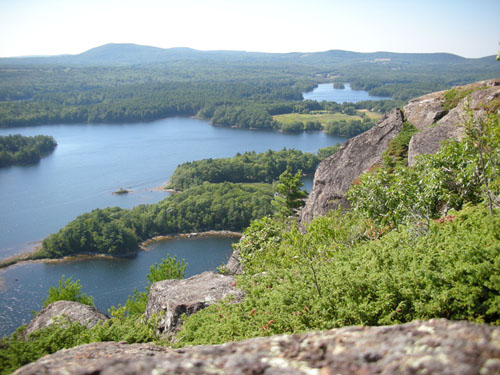 The intrepid climbing party. All we needed were some outrageously large hats for the ladies, and a couple of discreet servants in the background to carry picnic hampers. 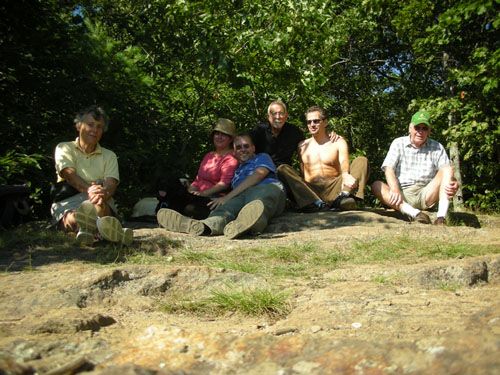 A day or so later, we set off to Lincolnville to have lobster. On the previous visit, we ate at the Lobster Pound, but this time we ate across the street at Chez Michel. Of the two, Lobster Pound had the better lobster by far. Chez Michel did have very fine French bread, though. 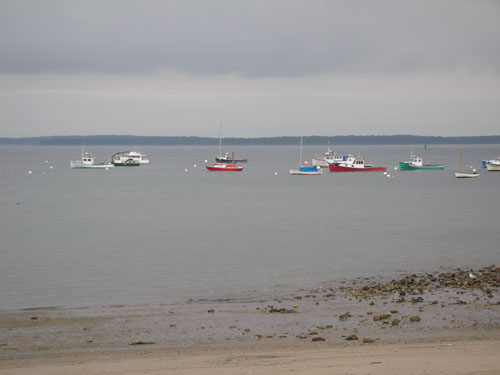 On Sunday, we went up to Blue Hill to the fair. George wanted to see the sheepdog trials (we went on Sunday and saw the finals, but I think I would have preferred the open trials). It was a nice little fair, not too crowded and not too sophisticated. There were some very good sheepdogs. 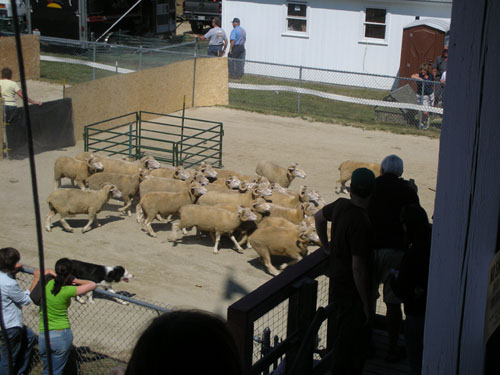 Here's a view over the fair. The usual collection of fair foods and game booths. 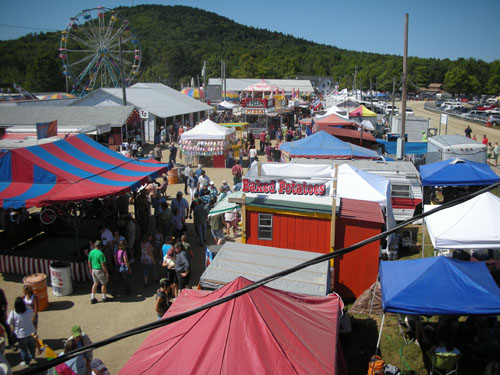 The highlight for me was the 4H pavilion. 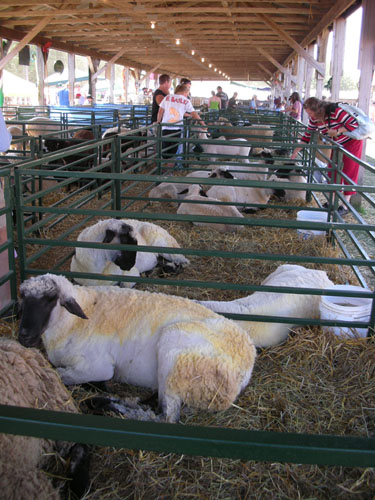 That night we lit a fire in the big fireplace with the owl andirons. Because there's no electricity at the island, all evening activities had to take place by lamplight. This meant fairly limited reading or other detailed activities. 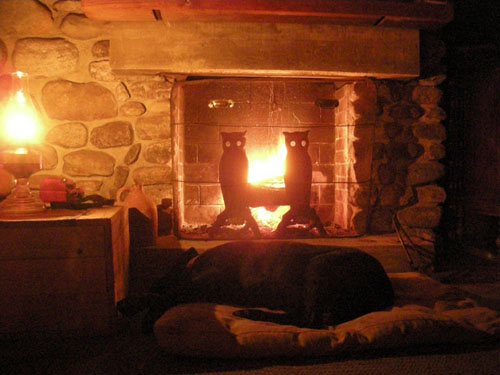 Most of Goldie's days were spent trying desperately to drink the entire lake. I think she may have lowered the level by an inch or two. 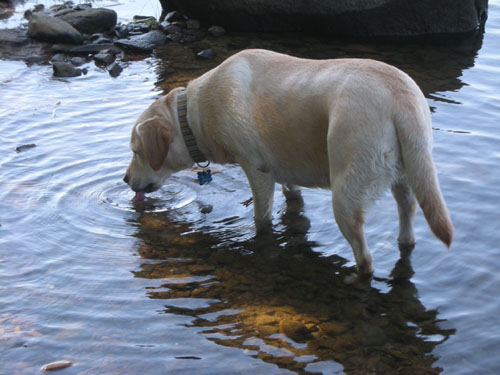 Rosie spent a lot of time lying in the water, interspersed with a few games of stick. As you can see, she was wagging while she swam. 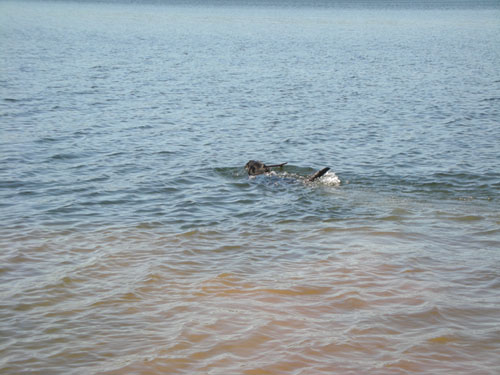 And after you swim, there's nothing like a nice roll in the sand to exfoliate.

In the meantime, Noel and George spent an entire afternoon working on making a miter box. This is less straightforward when all your tools are hand tools. 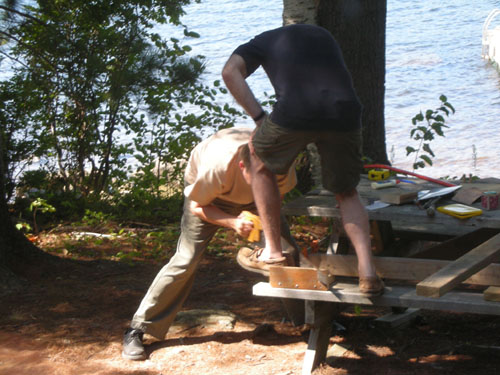 Later in the day, George, Christo, and I went to Rockland to the Farnsworth to look at some of the Wyeths. I was largely unimpressed by the watercolours, but the museum was fun. Afterward, we stopped to look at the harbor in Rockport (apparently there are a lot of rocks around that bit of Maine). 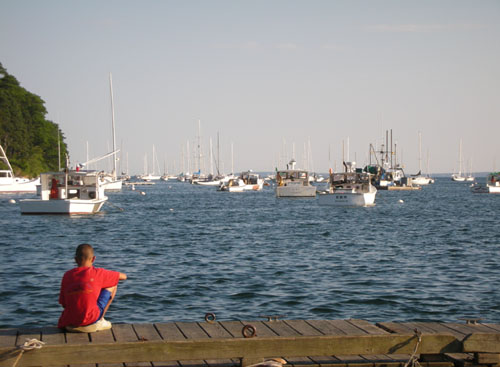 For my dad: some Belted Galloways on the drive back to the cottage. 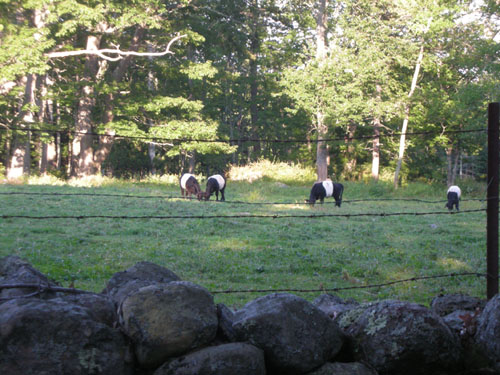 And then home. We drove and drove and drove, and just as the girls were starting to get really tired of being in the car we got to the rest stop at the edge of Utah, on the Bonneville Salt Flats, and they got to experience the miracle of salt bloom. 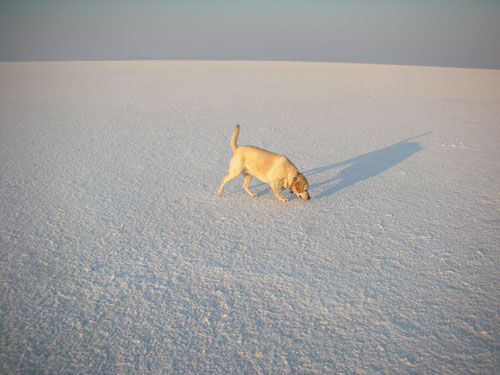 Rosie was enjoying rolling in the salt. 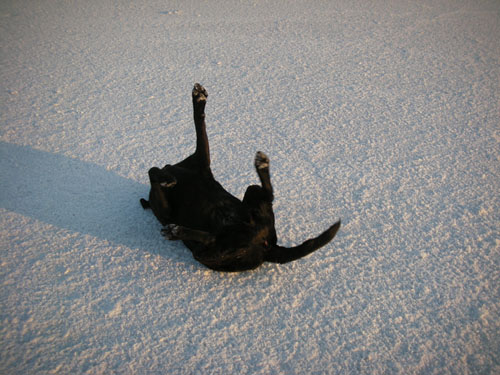 It's slightly moist, so it sticks to the bottom of your shows in a thick mat. You have to beat your shoes to get the salt off. 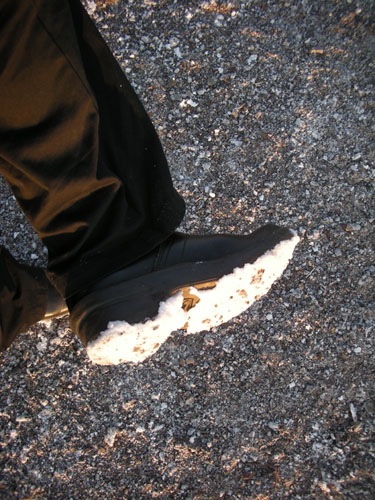 And rolling in the salt is thirsty business. 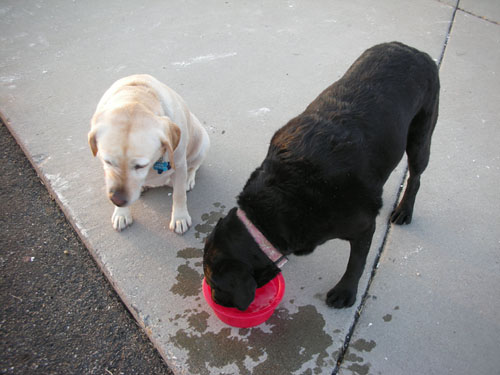 And now back to thesis and work. Almost all the way through Ohio on our way back. We're hoping to get to Davenport, Iowa tonight, so we can make the long haul across Nebraska and Wyoming tomorrow.