And my phone is working again!

Things That Make Me Cranky

1. Spending three hours to go four miles in Chicago, because the Good Citizens of Indiana don't want to pay enough in taxes to maintain their roads above third-world conditions. There's no excuse for how badly the closed interstate was handled: five cones and a blinking arrow sign dumping you onto city streets with no detour signs. And come on, how long does it take to pump the water off the road? Not three hours, to be sure. 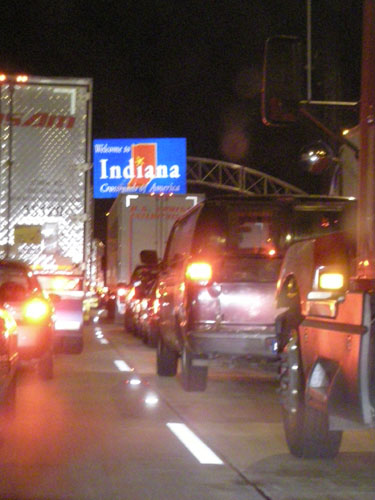 We lost a total of one and half days of time to delays like this, and this one was so bad that we ran out of time and just could not stop for the night. We ended up cat-napping in a truck stop and getting to my parents' house exhausted and filthy. But we got there.

2. T-Mobile was doing OK accepting image messages to Flickr for a day, then it stopped working so we called tech support and they changed something about my account. And THEN it all went to hell and now my phone crashes at the merest thought of sending a picture message. Still need to call and complain some more.

3. And even that would not be so bad, because I can use Noel's phone as a modem, but then the software I use for posting to this blog decided to just lose two posts. I'm not going to try to re-create them.

5. Also lame was how the people who own the truckstop had Jesus merchandise all over the place. Because nothing says belief like making little idol statues of your savior and selling them.

As an antidote to this, we have had a nice day or so in Ithaca with my parents, dinner with my godparents, and many walks for the dogs. Tomorrow morning very early we get in the car and make the final leg of our trip to Maine, at which point we will be incommunicado.

I-80 leaving Chicago is FLOODED. What kind of 3rd world country has rain in the summer, anyway? 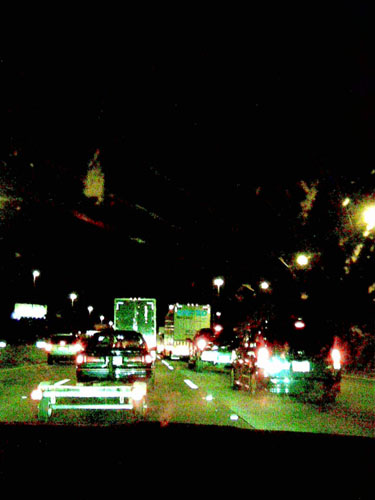 We woke up this morning in Lincoln, Nebraska. Which is a good thing because that is where we went to sleep last night, or rather earlier this morning. We would be much further along the road, after two days of travel, if it were not for this: 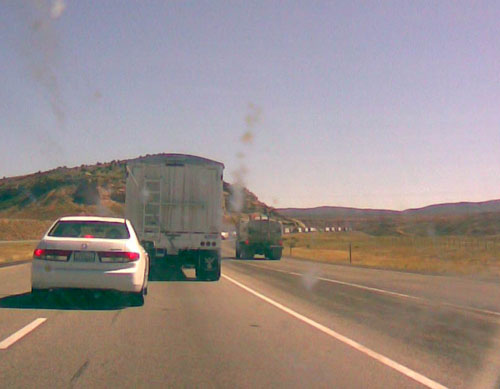 No, not the appallingly filthy windshield, but the long delays for road work. It took us three hours to get out of Utah: a distance of about 70 miles. And while Wyoming and most of Nebraska have been faster, they have also had their share of ridiculously long stretches of construction and lower speeds.

We've been taking a different approach on this trip, cooking our meals rather than eating at restaurants, and so far it's pretty good. We brought along my little backpacking stove, which it turns out I last used about eight or nine years ago, so there have been some moderately hilarious incidents of not quite remembering how to use the thing. We also purchased a little refrigerator that plugs into the cigarette lighter. This makes a huge difference, because we can carrying stuff like eggs and butter and also have chilled drinks. It's definitely been one of our better food trips. 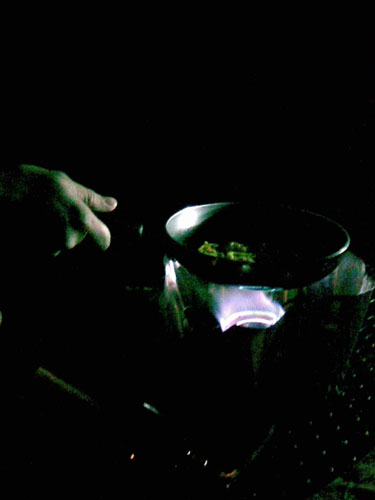 We stop every now and then to let the dogs out for some exercise and sniffing. These stops can be quite educational, as at the Wyoming welcome center: 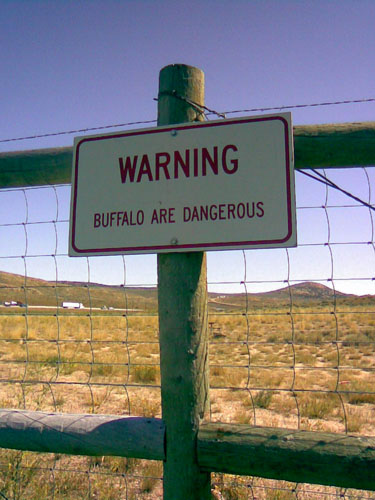 We even stopped in the notorious Little America, Wyoming, and had soft-serve ice cream. They advertise all over the place with huge, terrifying billboards, not unlike the late Wall Drug, in many ways. Only more corporate. And perhaps Mormon. 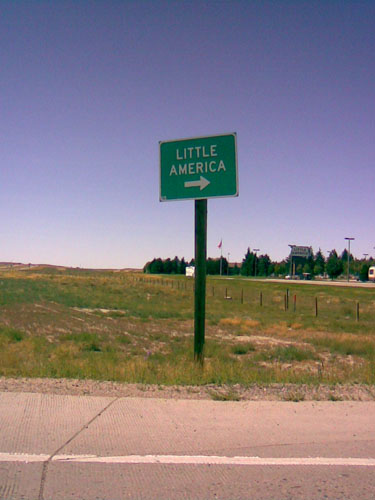 Wyoming is very restrictive of the activities of dogs. Always on leash, never allowed in the trash bins. Also, it is a state entirely without recycling bins, so we've now got a small recycling center running in the back of the car. 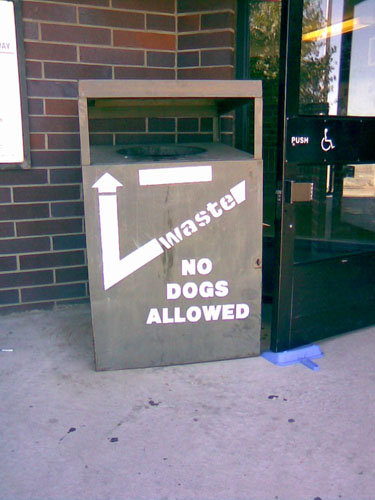 One of the neat things to see is all the new wind farms springing up around the midwest. We've seen several under construction (it took us a while to work out what they were building). And of course in operation. 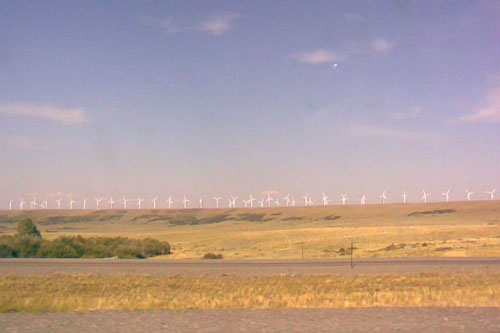 And now to get back on the road, with any luck to go slightly faster today than we were able to go yesterday. On the road!, originally uploaded by festiva_maxima.

The End of Summer

Well, the end of Summer Quarter, at least. Tomorrow, or later today if one is strictly technical about the time, we have our final review of the quarter, then Thursday we do our quarterly exit interviews. This evening I pinned up my posters and spent some time finishing my models -- I have to get some tape to finish putting my posters up but that will be easily accomplished tomorrow morning.

As you can see, the posters are drooping on the end, because the wall material changes and it's impossible to set tacks into the corner where they need to end. 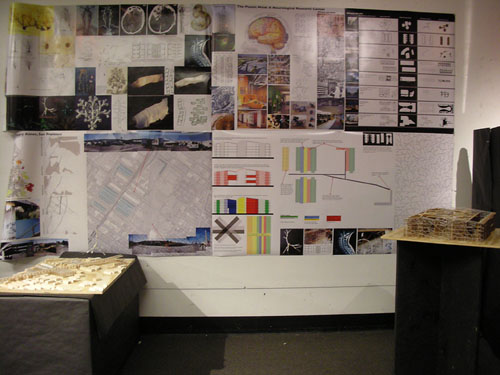 I need to spend some time thinking about my setup for these crits: it'd be nice to be able to take up less space with posters. Because posters are a major pain to hang. Anyway. Plenty of time to think about that in the next few weeks.

Here's the model I've been working on at Techshop. I ran out of time and didn't get the roof system together nicely, but this is close to what I was looking for: a jumble of scaffold and beams making some tall, dynamic interior spaces. 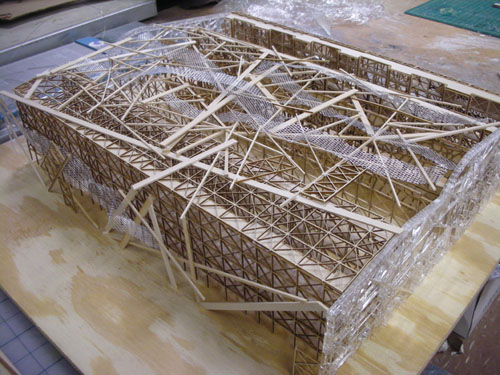 And here's a view inside, to show what some of the interior spaces feel like. Walkways, scaffolding, tall spaces with lots of little rooms off them. A nice complex system that is actually based on a very simple repetitive plan, much like a biological organism. 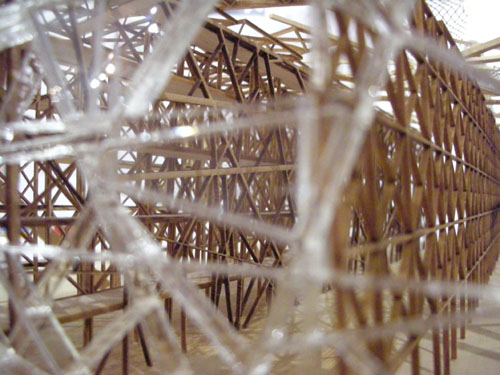 Anyway, off to bed to get some rest before morning pre-flight.

There's no artful way to say it, and if there were, I'm too tired to come up with it. Cutting plastic on the laser cutter takes forever. Here's the laser cutter in action on some 1/16" acrylic. This much cutting took two hours, and as you can see in the photo the plastic curled from the heat. 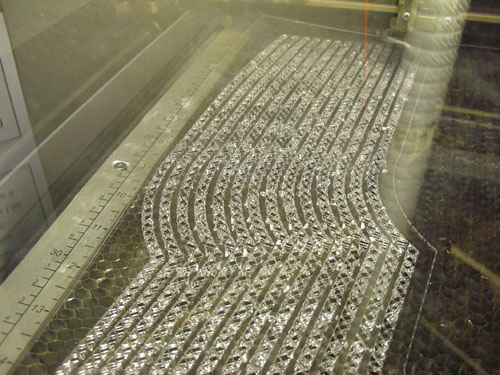 I spent three sessions on plastic cutting and got, well, barely anything actually done. That sucked. Of course, had I been trying to make this stuff by hand I would be nowhere near as done as I am, but that is small consolation.

I was cutting out these pieces, which are roof trusses for my building model. The 1/16" acrylic bent while cutting and ruined the pieces. The 3/16" acrylic worked like a charm, only my job would have taken five hours and we can only sign up for two at a time at Techshop (and there were others waiting to use the cutter). 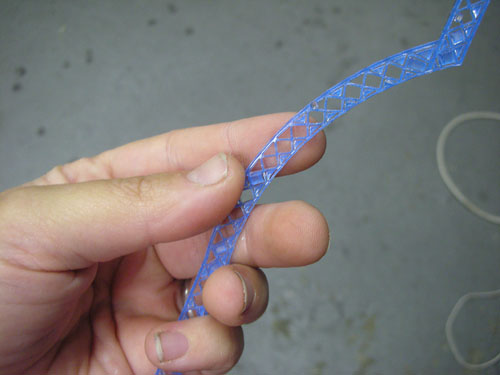 This is the 3/16" job. You might be able to see there that some lines didn't get cut, because they were not the right thickness (the laser cutter slices hairlines and etches anything larger). At 3/16", the laser had to operate at 6% speed, which is slow, slow, slow. Yeah, in fact I do hear the world's tiniest violin playing for me. 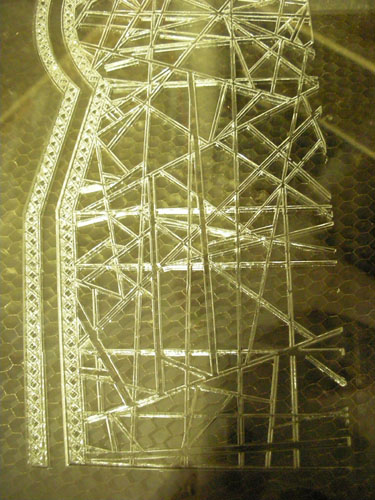 At any rate, that's it for this cycle on the laser cutter: We have our summer final crit on Wednesday and I doubt I will have time to make another quickie trip home for more time. Maybe next weekend, after the pressure is off.

Also, some queries about what the setup is like. Here's the laser cutting station at Techshop. Just the cutter, the computer it's attached to (the laser cutter is a printer that takes jobs from Corel Draw), and some notes and cleaning kit. I bring in my laptop to work on while jobs are cutting, because sometimes things take a really long time.

And here's the laser cutter at work. The Helix has a 24" x 18" bed, with decent registration. The bed moves up and down to accommodate a variety of materials, but the laser can only cut to about 3/8". Choice of materials is restricted because some materials release toxic gasses when burnt, while others make an unholy mess of the laser (ie, chocolate). 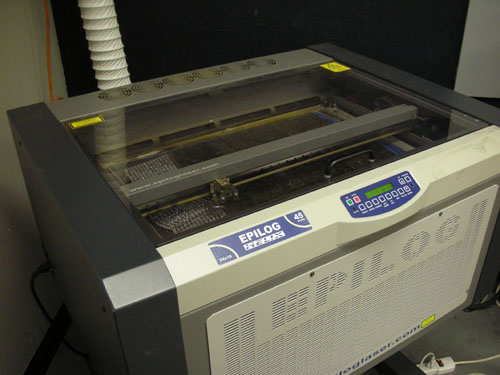 So what the heck am I doing with all that laser-cut stuff, anyway? Here's a little view of one piece of the stuff I've been assembling. My next iteration will have vellum screening glued onto the backs of the inner pieces. Maybe I should spray paint it black, too. 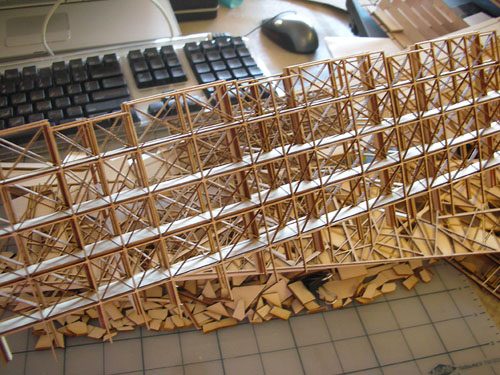 This piece is something I'm still working out. I like the pattern a lot, but I'm not sure how to use it in my building. 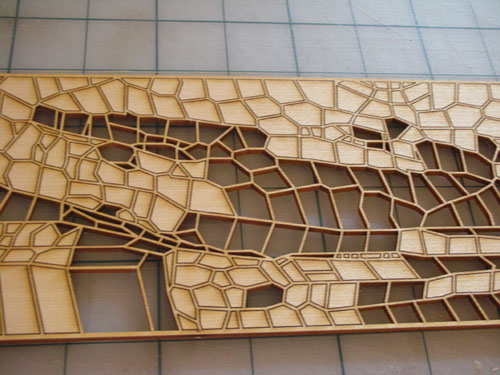 I've now done a couple more sessions on the laser cutters at Techshop, this time using the Helix. Big, big difference. The Helix can cut the material the first time! Without torching it!

Here's a close-up of the mess the Summit made of my wood. It did OK in some spots, but where it was out of focus the cuts blurred together. Messy, messy. This was essentially a total loss, and the Summit works so slowly that this file had taken almost two hours to cut. Or rather, to burn in a sort of imprecise way.

(For the record, I will probably use the Summit for any etching jobs I have because it is not bad at that and it pretty much always free.)

And here we have the Helix hard at work. This is the exact same file as was cut above, and you will note that there are two lines, rather than one blurry one. (This is 4" wide basswood). 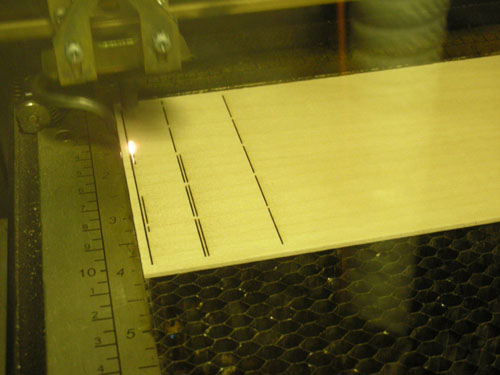 Here's one of my grilles I've been drawing and cutting this week. This one is based on some dendritic growth photos I found in a book. 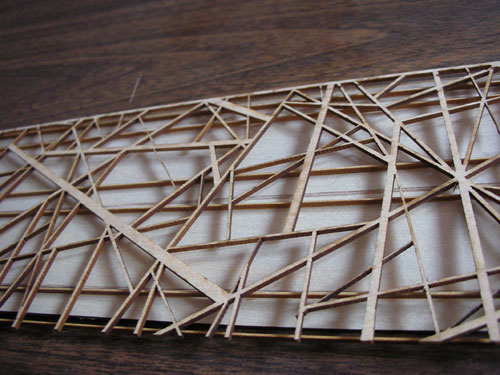 Here's the Helix-cut grille from the file I used on Monday. This is less than four inches tall, again, and those tiny pieces in the middle are incredibly fragile. I may have to redo the file to make this work. 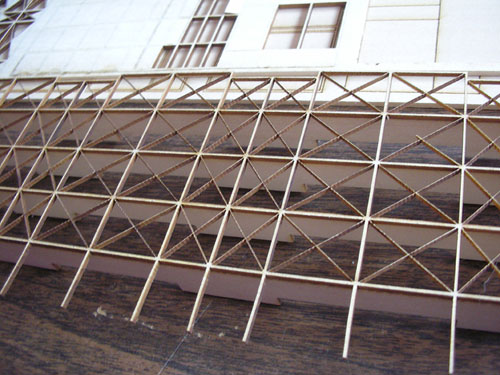 It does look pretty awesome, though. 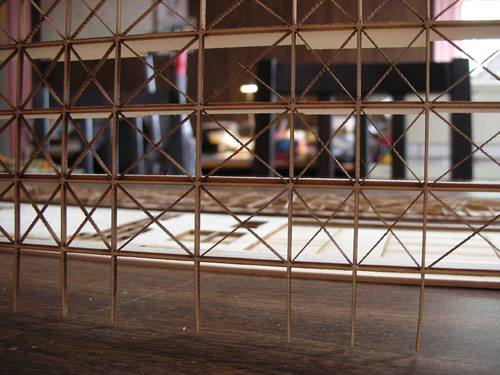 I'm working on some more pieces today (I have to take a break because somebody was waiting for the cutter), and then I will be making them into models this week. The laser cutter is definitely making a huge difference in my ability to iterate on my designs.