I recently bought an almanac. I'm not sure why, except that I've always kind of vaguely known that buying almanacs was something you do when you grow plants. At the botanical garden where I worked long ago, there was always one hanging in the office on a peg, and it had pages for every week of the year with little notes that said things like, "Sow peas now." That sort of firm directive is very useful to a chronic ditherer like myself: I'm more likely to put it off too late while I try to figure out the ideal time for sowing. And it had lots of info on the phase of the moon and planets and all that.

So I bought an almanac, not really thinking about the fact that a) almanacs never have the right planting information for this climate, and b) all that information is free on the web these days anyhow. Needless to say, the almanac is, while almost completely useless as a source of useful information, nonetheless of great interest to me because it is clearly aiming itself at an audience of people who are both moderately obsessed with the moon and not on the internet.

I will leave it to you to figure out the demographic of moon-obsessed non-interneters (luddite werewolves?). Suffice it to say that I don't think I need to buy another almanac. I'm thinking of making my own perpetual calendar for the garden, anyway.

We're on our last week of the design portion of the San Francisco internship program. For five weeks we do an intensive design studio, then for six weeks we work at a firm while doing lectures at night.

Our project for design is an affordable housing project in the Tenderloin, and we could choose between family housing and senior housing, or a mix of the two. I chose senior housing. This week I am working on elevations, having just finished the floor plans for my residential levels (the lower level is commercial space). Wanna see?

Here's a typical floor plan: the second through fourth floors have this plan. The red areas are egress stairs, the light yellow are common spaces, and the light blue is the laundry room. Sorry it's so blurry: the original is on Arch D paper, 24x36 inches, and it does not like to reduce to something this small.

Anyway, the plan is fairly simple, but things to note are that while there are plenty of units in there (19 per floor), there are lots of open spaces to sit and socialize. That is because the units are teeny-weeny (even though they are entirely accessible). 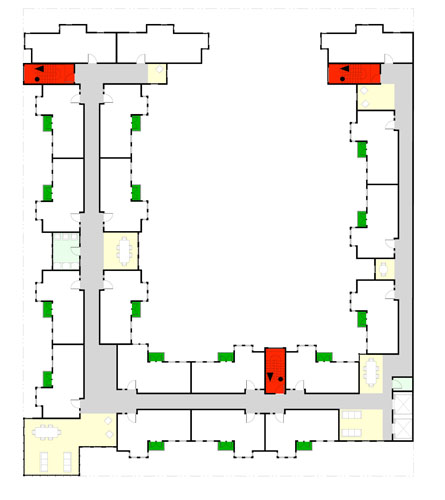 For example, this is the typical unit, 350 square feet. I've designed it as a "split studio," with the bathroom breaking the space into a kitchen/living area, and a bedroom with a sliding panel. That's because a lot of seniors babysit their grandchildren, and need a place for them to take naps. Or couples might want to have some time apart. I think it makes a very small space more livable. 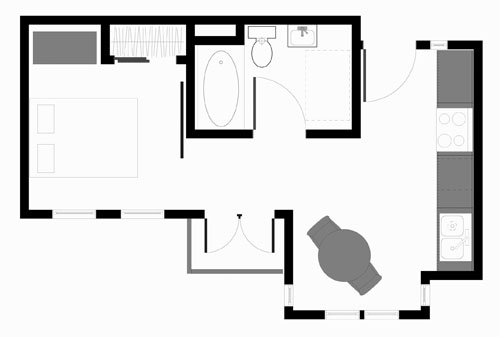 On the ends, I can let light in from two sides, so I do. This unit ends up at 380 square feet, largely because of the bay window in the bedroom. Same split-studio design, too.

On the top floor I deleted three units and put in a roof garden with benches and planters, so people can grow vegetables or just sit in the sunshine on the few nice days a year. One of the complaints seniors have about their housing is not having good places to exercise, protected from crime. This roof is one of three exercise spaces I have created (the other two are on the ground level: a courtyard walking path, and a long exercise gallery for inclement weather). 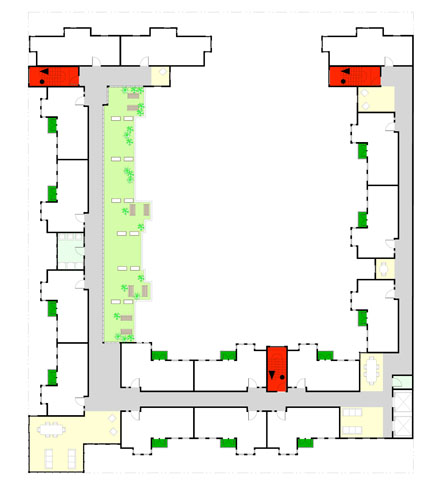 I think the second floor will also have roof gardens above the commercial spaces on the first floor, but I haven't finished drafting those yet so I'm not sure how they're going to look. Right now I have to work on doing some more elevations for a conference with my teacher tomorrow afternoon.

I'm going to be buried in this for the next four days. But I'm enjoying it immensely.

Noel bought a harmonium. That's a small pump-organ, powered by a pair of foot-pedals. This one was fairly cheap as it was non-functional. But with a few repairs to some straps last night, he got it to make sounds, and this morning we gave it a thorough cleaning, which turned out to be 99 percent of the problem. It's from the 1890's, and looks like it was last cleaned in the 1930's. 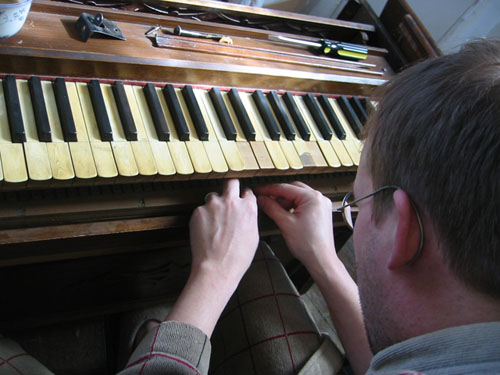 It's got a nice sound to it. Not the highest-end of harmonia, so the volume waxes and wanes as you pump, but it's a pleasant little house-organ. Especially now that it is fairly clean.

Or Maybe I'm in Poland

Some magazine articles I wrote years ago were translated and redistributed abroad. Given that the products they were about were obsolete more than five years ago, this has never been a major issue, but today I received a long letter with multiple quotes from what can only be a Polish translation of an article on network backup software. I speak no Polish at all, although some things are easy enough to understand. I don't even know if this person is angry or happy or just wanted to clarify something, or even tell me that new network backup software works better.

Apparently my writing career in Eastern Europe is still doing quite well, unattended.

I Guess I Don't Exist

Or else I am abroad. You'd think that they would just ask, when I finished, whether I was in the US, so they could make their database work. Then they'd have the right number.

I tripped while hurrying through downtown San Francisco this morning, fell down, and landed on my right knee. That would be my bad knee.

For a while I just sort of rolled around on the sidewalk muttering obscenities. Then a Fedex guy helped me sit up and a moment later I was able to stand up, if not quite able to bend my knee. This was good because I was going to meet up with my class for a day-long walking tour. Oops. Maybe not so good.

I lasted until about 12:30, though. Three hours before the pain got to be so bad that I just had to go home and lie down. My knee looks terrible, but it appears to be merely bruised. I have huge ugly bruises on my palms. But I managed, somehow, to avoid sliding and scraping the heck out of myself, which is a step up from my usual falling behaviour.

Of course, this would have to happen in a week when I planned to finish making a foundation for the shed, and in which lots and lots of plants are arriving for fall planting. Fortunately, it's a lovely day, and we are well stocked in ibuprofen.