I've been reading about top-down knitting, which is of great interest to me because it is so different from how I usually knit. I usually do a muslin, and knit pieces to match the muslin then sew them together. Very old school, but it combines my experience with sewing clothes and knitting them and works very well. However. Knitting top-down is more about working in three dimensions. So I figured I would try out a pre-written pattern first, to get the hang of it.

This pattern from Zephyr is a very easy top-down raglan knit in the round. The pattern is so easy to follow that I think even somebody who has barely learned to purl could understand it. And with it being knit in the round, there's hardly any purling to begin with. I doubt I will use it again, though, because doing this sweater is showing me just how easy this style of knitting can be, and the design is nice but not something I want fifteen of.

The thing about all that knitting with no purling or anything really complicated (yarnovers do not count as complicated) is that the whole thing goes very fast. I started knitting Thursday, and have only put a few hours into it. 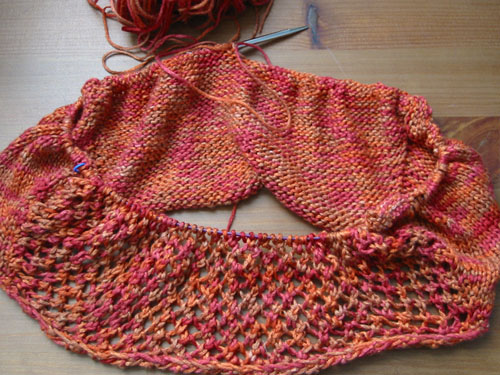 Only one thing has slowed me down, and that is that yesterday Goldie grabbed the knitting off the couch and chewed it around and made a mess with it. Not too bad as far as dropped stitches (only two, easily picked up again) but she bent my circular needles, which makes them a bit funny to hold (you can see the dramatic bend on the right needle in the photo above). Also, the ball of yarn, Bamboo (Southwest Trading Co.) got all messed up and was hard to unravel. But I think I've worked out that kink, and at this rate I'll be moving on to the next ball soon, anyway. 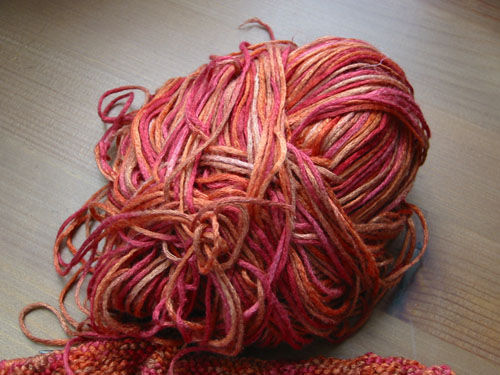 I will say this: bamboo yarn is really nice and soft to work with, if a tiny bit splitty. I will definitely be using it again. Also, I will be more diligent about putting my knitting out of reach of the stupid dog.

Today I created an underlying system of geometry for my building. It's based on a shape found in the collage, simplified and repeated and altered. I'm not 100 percent certain how I am going to use it in the building, but I think these may end up being floor plans. 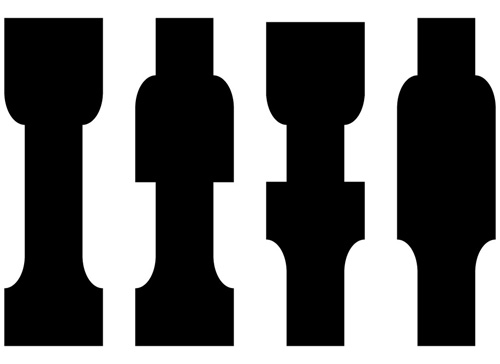 Also, I decided to drop my second construction class. That gives me two more weeks at home, and more time to work on studio things. More sleep, too.

A lot of this quarter in studio has been focussed on methods for finding a form and an underlying structure for a building. I've been working on a series of pieces to that end: a "junk" sculpture, then some digital collages from photos of the sculpture, and now an attempt to turn those collages into a massing model of a building.

This is the collage (actually, a cropped out piece of a collage) I'm using. 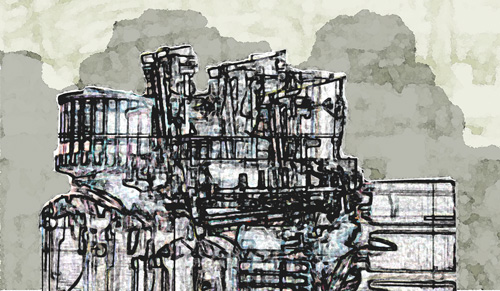 I am designing layers of protection: an arcade, a windowed corridor, then a darkened, sacred inner sanctum. My building is a museum, but also a mausoleum, because it is a repository for discarded taxidermy (something I've been moderately upset about for many years).*

I want to building to have a sort of contemplative nature, one that makes you turn inward and think about how humans relate to nature, but I also want it to be kind of creepy and weird. So over the next few days I will be refining my plans and sections so I can make a flow through the building. Blah blah. Also, I will be thinking a lot about refrigeration units.

Off to the Wineries

For research into our studio project, we went around town on Thursday looking at buildings under construction, and some wineries.

Our first stop was at a construction site, where they are putting together a series of office buildings out of tilt-up concrete. The theory with tilt-up is pretty simple: they cast the walls on the floor, then lift them up into place and bolt them together. It's perfectly good construction, and saves the cost and risk of building full-height forms. The thing about concrete buildings is that you end up building them twice: once in formwork and once in concrete. Tilt-up reduces the labour and materials because you don't have much formwork to build at all.

But how to connect the walls to the floor? The way it's done is like this: you can see that they left the floor a bit shy of the wall, and some rebar is arranged to come out of the wall and tie into the floor. Sometime soon they will place concrete in that hole and tie the building together. Although it was pretty well tied together when we were there, already. 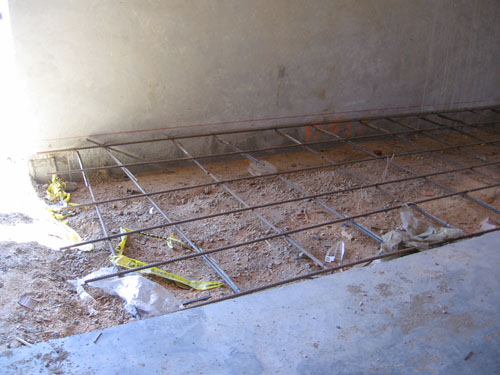 Here's the second floor. Construction and engineering people in the crowd will notice that there seems to be a lot of extra structure in there. Not only that, but they used glulam beams that will end up covered by a dropped ceiling. That's a lot of wood to pay for, and wood is not cheap. Trusses would have been cheaper and easier. And it would have been a lighter building. 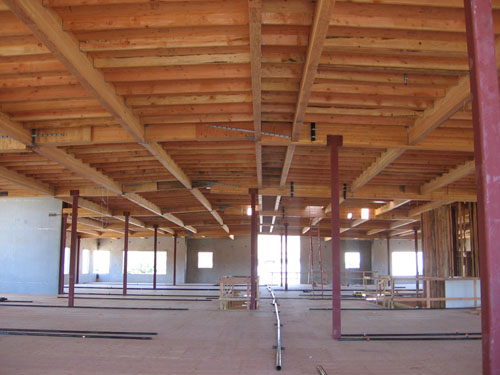 The other oddity in this building was the little side-return walls for this bump out. They were cast in place in three-foot flights, instead of being tilt-up or some other material. The supervisor told us it was extremely expensive to do it that way, and guess what? The wall is getting covered up anyway. But the owner insisted.

The odd dots on the left wall are the little pins that they use to lift the wall into place with a crane. One of the reason you can be pretty sure tilt-up buildings are safe is that any wall that can survive going through that is a pretty strong wall. 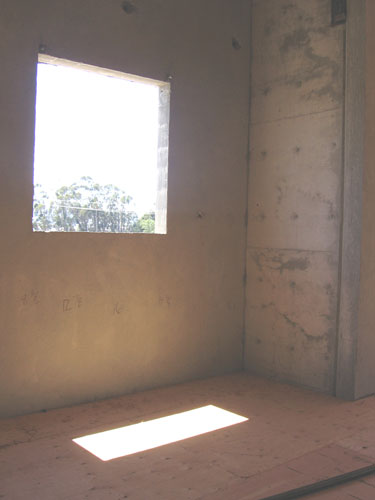 Here's a guy digging a trench. It was 90 degrees out. I felt for him. 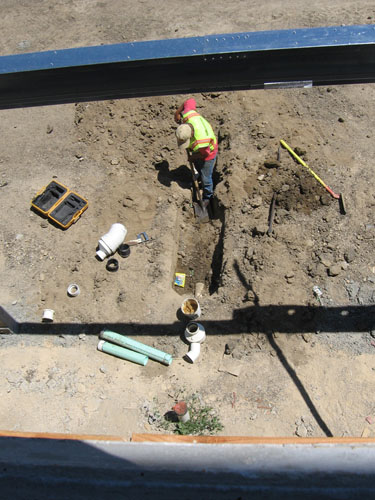 Our next stop was Claiborne and Churchill winery. Their cellar/tasting room is straw-bale construction, and uses no mechanical air conditioning. It was nice and cool inside, despite the heat. On the other hand, any building with eighteen inches of any kind of insulation would be as cool. I'm not a big fan of straw bale building. 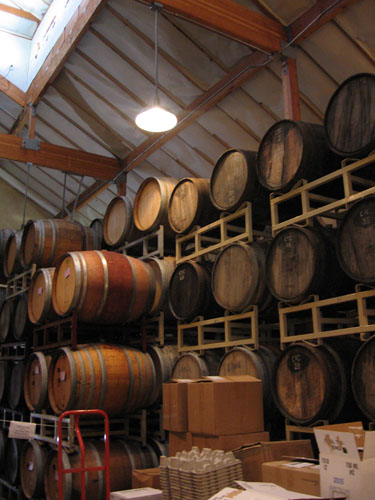 Our last stop was Tolosa, a winery that was designed by one of my teachers from last year. The style was much more modern and hip. Here's the view from their conference room. 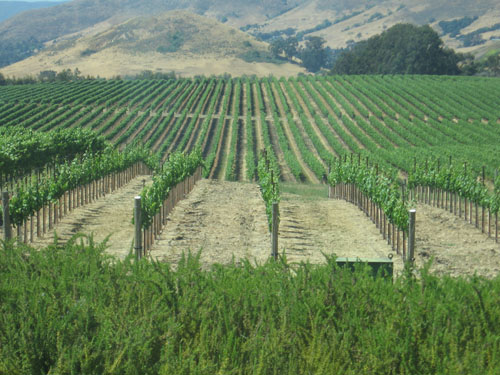 We did a tasting there, and they were very nice about the large group coming without warning. They had some decent wines, but nothing that I got really excited about. On the other hand, there was only one that made me want to rinse my mouth out, which is pretty good.

I had the dogs with me in SLO this week, because Noel was at dance camp and Rosie has a nasty hot spot (read: weeping sore) on her head that needed tending. Mostly they just sleep during the day: Goldie gets locked in the crate because she is bad when unsupervised, but Rosie will sleep on her dog bed on the floor or right by the door where she can look out at the yard.

I went out on a field trip with my studio yesterday, and when I came home, this is what I saw: 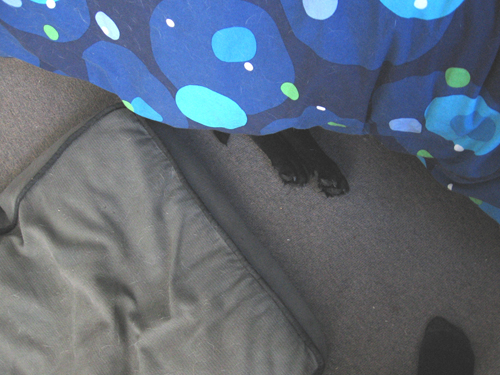 I don't know if it was cooler under there, or if she just wanted the comforting feeling of being in a den (that's why dogs like crates, after all). But Rosie was asleep under the bed, and she spent the rest of the evening and most of this morning there.

A while ago I pruned my mother fern and started a bunch of baby ferns in a plastic tray. This is no great feat with the mother fern: the thing reproduces remarkably easily. But even so, it is delightful to come home and look at my little tray of ferns, all growing well. 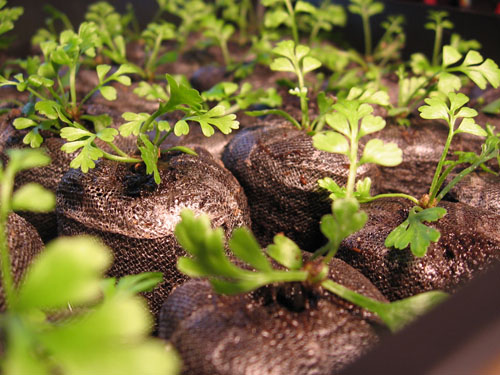 My experiments with spore reproduction did not work out so well: we got to the green fuzz stage and no further, so my next attempt on that score will involve actually sterilizing the equipment. 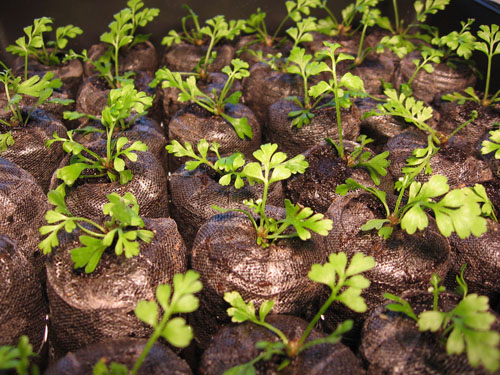 But for now, the little mother ferns are pretty nice. Anybody want a fern?

We had a little studio field trip today, first to visit the site for our final project, and then to a junkyard to get some things for the next phase of our work. 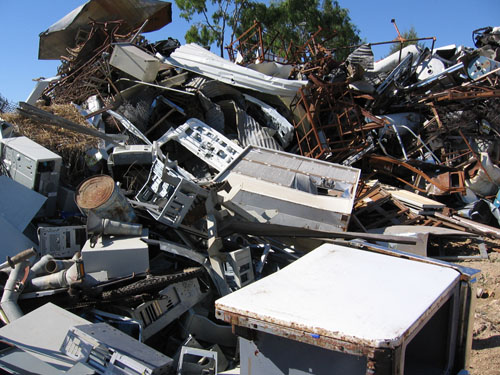 I'm usually not much of a junkyard person, having been trying to get rid of excess crap in recent years. But this one was very interesting, with piles of scrap and sorted bits and bobs.

I chose a large heat sink, because I find the physics of heat sinks really interesting. One of my favourite tricks is to soften butter on our large aluminum griddle through the miracle of high conductivity. 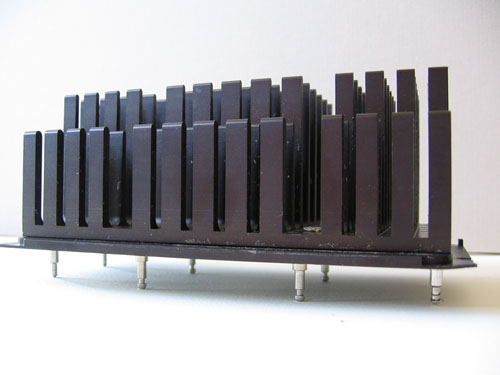 I also love how this heat sink sits up on legs, like Corbusian pilotis.

A friend brought us some homegrown plums this weekend, and instead of making ourselves ill eating them, we made plum jam. It hadn't set up when I left home this afternoon, and I'm not sure it's going to set up at all (even though the skimmings did set) but time will tell. My family appears to be cursed with regard to jam setting. 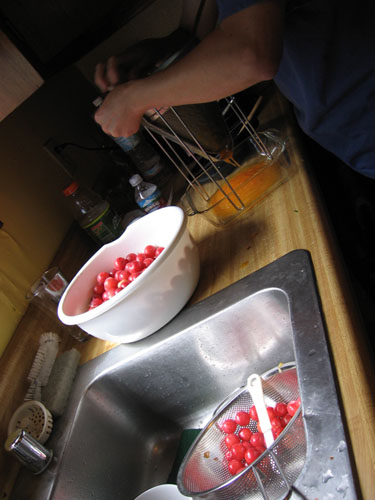 We used a very simple recipe: fresh plum puree made in the chinois, sugar (roughly 1 1/2 cups per cup of puree), and a packet of liquid pectin. The puree and sugar are cooked together until they've boiled for a minute, then the pectin is added and the foam is skimmed, and you can the jam up. The puree took a long time to boil, but you have to stir it a lot because otherwise you might scorch the bottom of the pot. 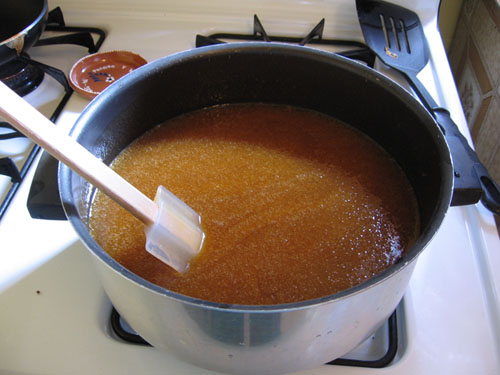 Canning itself doesn't take long. Sterilizing the jars took forty-five minutes, which was pretty much the longest process. Each set of four jars went into the water bath for five minutes to seal them, and they all sealed. 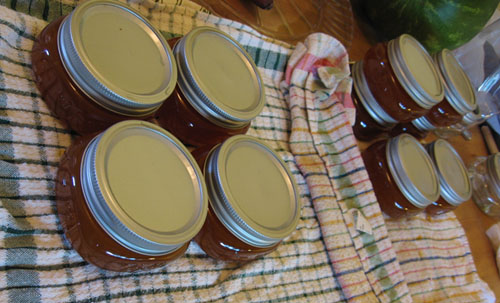 The only real pain is getting the jars in and out of the hot water. We only had very large pots around, so we ended up with a steam tunnel. But with a slightly better setup making jam would be even easier. 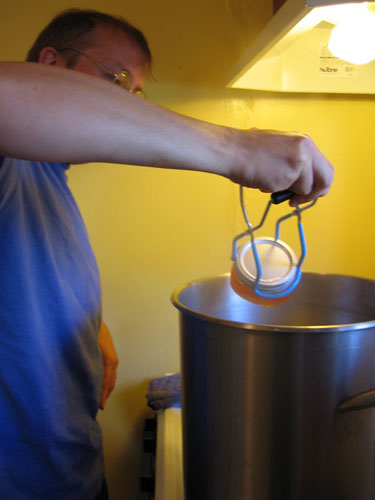 I'm planning to make rose hip jelly later this summer, when the Bonica and Cecile Brunner roses ripen. I might also buy a flat of cherries and make cherry jam, but that's less likely.