All About Pod Thing

We've wrapped up the cardboard object exercise in studio, and the final step was to make a portfolio page about the project. I've been working on my portfolio this summer, anyway, for the internship program in the fall, so the only thing I had to do was decide which of the photos I took would work best. But here, I can use them all.

We started with an item from nature with a structural system. I found these seeds, encased in a hard protective shell. 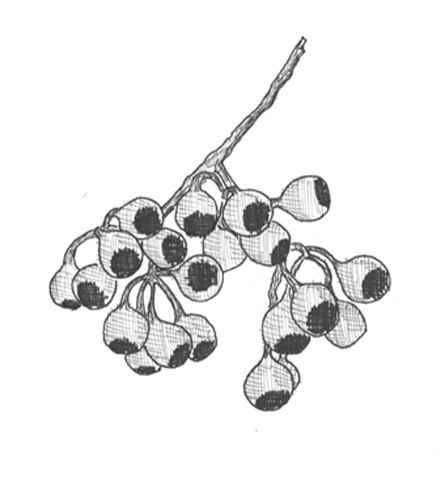 From the seeds I generated this small pod thing, which echoes the structure and adds colour and texture not entirely clear on the smaller seed. 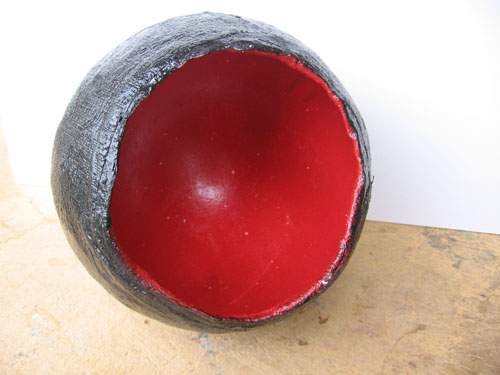 Some of my classmates generated a second model, but I felt like mine did everything I wanted it to, so I moved on to the final object. 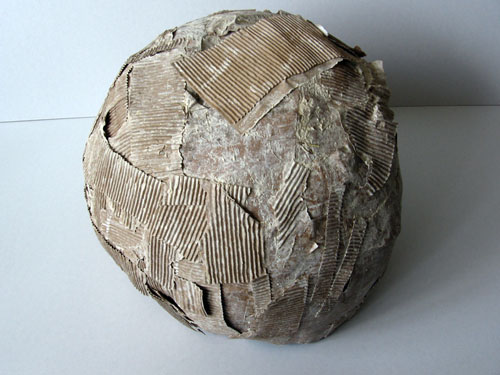 The thing about paper mache with cardboard is that it takes FOREVER to dry, so this pod thing only finished drying yesterday evening. I'm going to add a few more layers of cardboard to it, with glue instead of flour paste. 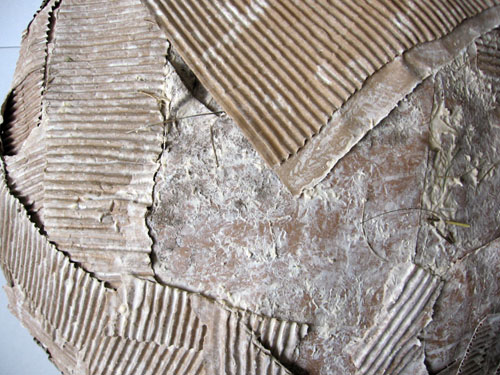 One thing I've been loving about this project is the surface texture on the finished object. It's not beautiful, per se, but it has a lot of character. 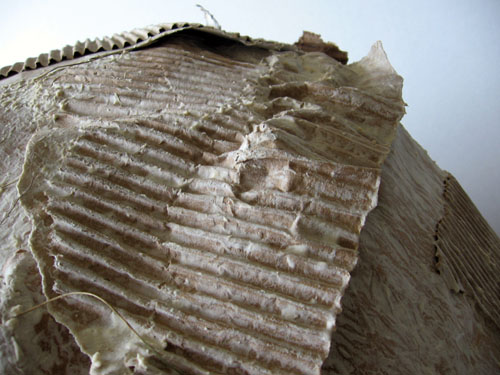 Especially the places where I had to pull off layers to help it dry, and where it picked up sand and bits of grass. 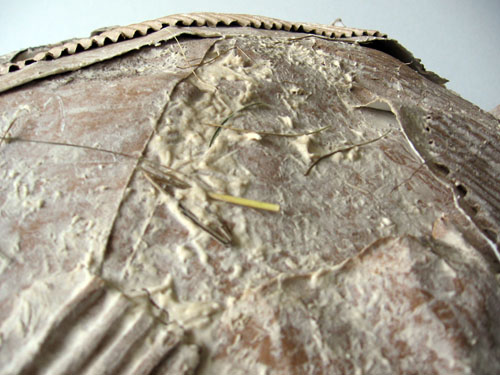 I've been working on this drawing of it for the last couple of days. I think I might have the shading right, now, but I haven't scanned the latest version. I like how drawings come out when you start with pencil and then ink them. They get a very clean quality to them, even if you are very loose in your style. 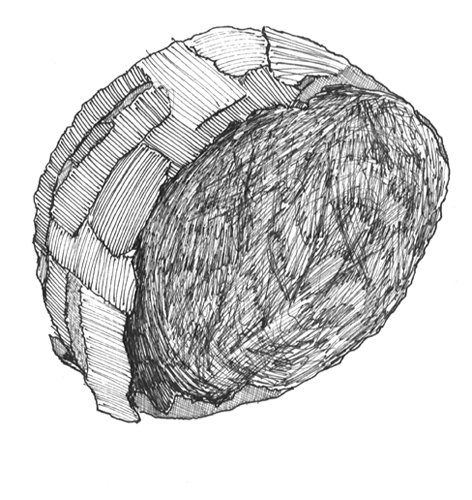 We're moving on now to a project involving junky appliances.

Our latest assignment was to make an abstract painting based on some of the ideas behind our model, and inspired by a famous painting. I based mine on Arthur Dove's Forhorns, which is one of my favourite abstract expressionist paintings.

It's a bit hard to see the beauty of the surface on the web. But suffice it to say that I am very happy with how this turned out. 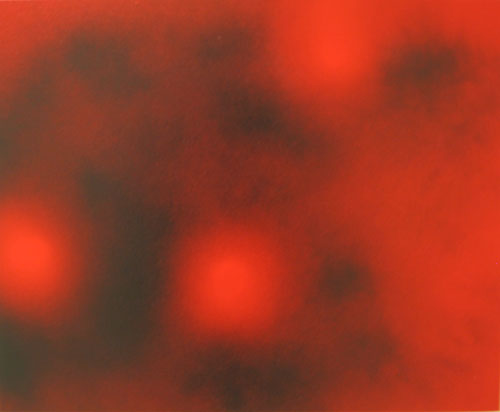 Yesterday afternoon, Noel took off for a gig and I attacked my beach ball. 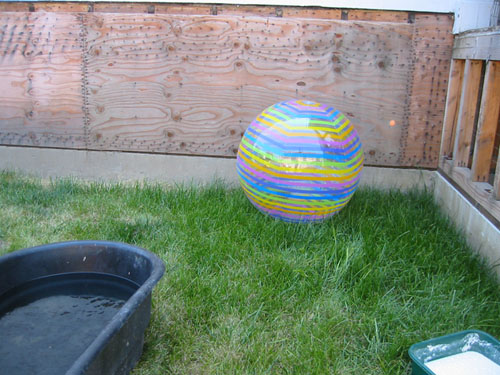 First I would like to say that it takes quite a lot of air to inflate a 48" beach ball (it ended up being more like 35" diameter when inflated). I spent most of Friday blowing it up, with the help of our roommate's bike pump.

I borrowed the dog pool and made a vat of flour paste, and began work.

I ripped the cardboard up, soaked it in water, then split it in half and pasted the smooth half on the ball. This was incredibly messy, in part because the weight of the cardboard made the whole thing roll around a lot, and also it was, as usual, windy. 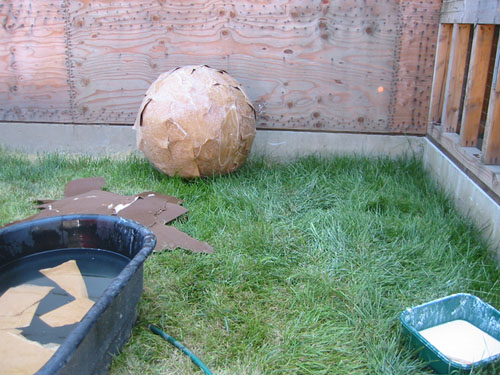 When it was reasonably dry, I put it in the back yard. Any earlier and I would have had a dog glued to it. Today I add another two layers. 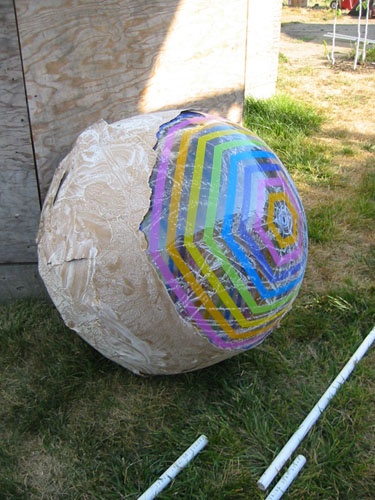 We're working on an interesting little project in design, although it manages to be interesting while also being a project I was hoping to avoid in my later years of architecture school.

Here's where I started: 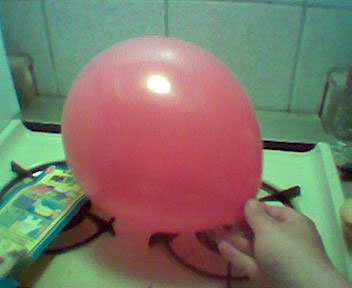 See, I told you it was interesting.

I took that little red balloon and wrapped it most of the way in gauze and plaster, like making a cast. Then I let it set up like that for a while, until it was quite firm. 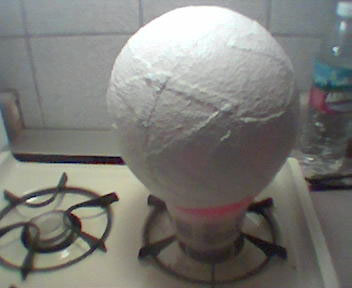 I popped the balloon, and spray painted the inside of the pod thing red (using a nice low-VOC spray latex, by the way). The spraying took place outdoors in the dark, so it was a trifle sloppy. No matter. 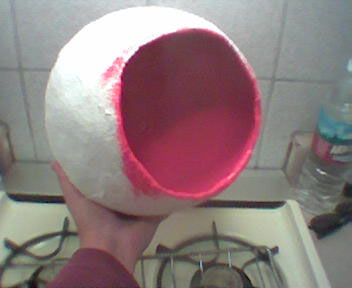 My next move, after the red paint had dried, was to inflate another balloon in the pod thing and spray paint the outside black (the new balloon was a mask for the red paint inside, see). 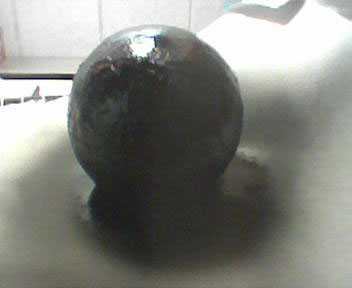 And here's the final pod thing, sitting on my desk. It's beautiful. The shell has this marvelous texture of shiny and matte, smooth and textured. I could play with it all day. 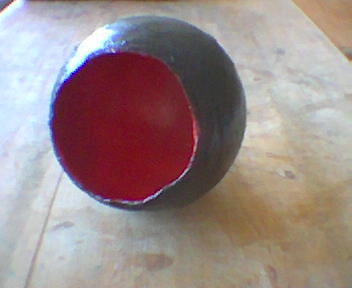 So what is this pod thing for, anyway? It is the form-giver for a project that is best summed up with this drawing from my sketchbook:

Happy anniversary to the poppy of my puppies. 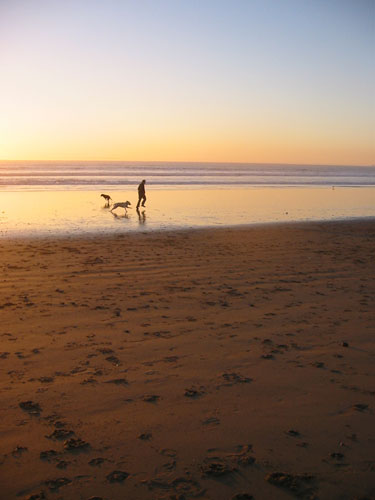 And many more, sweetie.

We drove up to Sacramento today to pick up the dogs from dog camp, where we sent them during a last-minute trip to Minnesota. We could have had them come back on the dog bus, but that would mean a dogless weekend, and my not getting to see them until next weekend.

They had a little trouble getting comfortable in the back seat of the car while we dealt with unpleasant traffic. Of course I took photos of them in their distress.

Usually they sit with Rosie behind the driver's seat and Goldie behind the passenger's seat, but they got in the wrong way at first and could not seem to figure it out. Goldie kind of draped herself over Rosie's butt and tried to fall asleep but it was not working right. 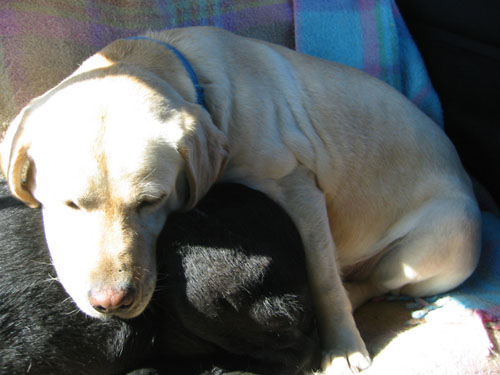 We stopped to get some snacks and look at a map, and I switched them around, and almost immediately they curled up together and fell asleep. Here's Goldie nodding off. 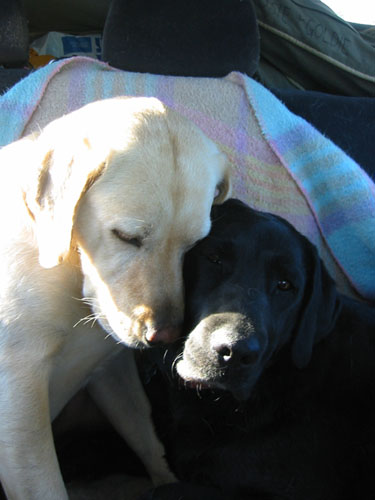 I'm back to school tomorrow afternoon, so I'm putting this post up to look at when I miss my girls.

Hey, I just got kicked out of my final exam in Farmer Class. No, not for brawling or cheating or anything really interesting. The teacher just went around and picked off everybody he was sure was going to get an A on the exam, wrote the grade on our tests and kicked us out.

Brawling would make a better story, to be sure.

Oh, and: the irony? When he did it, I was struggling with converting gallons to cubic inches because it was 7am and I was half awake (and hadn't had breakfast).

1. We had our final crit yesterday in studio, and for the first time this year, I felt really good about my project and really ready to be critiqued. And I feel like it shows in the project itself, if that's possible. I still need to tweak it before I turn it in next week, but it really only needs tweaking, nothing more.

2. I am signed up for studio over the summer, plus two construction classes for my minor. That means I don't get much of a summer break, but I'm on the accelerated track to graduate December 2007, which is a very good thing.

3. It was 85 degrees here today, and I am dying. I am so overheated that my hands are sweating. That is just wrong. Did I really just sign up to stay here for the whole summer?

4. I just started 36 plantlets from my Mother Fern. So if you want a little Mother Fern in the fall, let me know, because I only want a few of these, but it seemed like a waste to not plant up more of them. For those of you who don't know, Mother Ferns are 24-30" tall ferns that produce little plantlets on the fronds (rather than making spores) that you can pot up and grow into new plants. Eventually the fronds get so weighted down by the plantlets that it's a good idea to remove them or the whole frond because the fern starts looking really sloppy. If you grow them outside, the frond will fall to the ground on its own and the plantlets will root themselves around the original plant, but mine is in a pot. Anyhow, they should be large enough to move around by September. They make good potted plants in shade, and in the Bay Area they can grow in the ground, though they will need rich soil.