One Major Problem With Plant Propagation

The main problem with both contemplating the future greenhouse and also playing with a bit of plant propagation is that after a short time, you start walking around eyeing plants and thinking about whether you want to take a cutting. Then you spend a lot of time thinking about how you would go about taking that cutting, which, if you are on state property, would not exactly be legal. Not, of course, that I would ever take a plant cutting on state property. But, you know, I walk around state property all day, and there are a large number of interesting plants there. And who would notice a six-inch twig missing from that fascinating maple? Nobody.

Even more insidious is the thought that you could gather seeds or spores from various plants. Seed propagation is much more iffy than cuttings, because you are relying on the plant breeding true, which it is unlikely to do. But you could get something even more weird and exciting, and thus the downward spiral begins, because seed propagators end up starting many times more seeds than the number of plants they eventually want. (This is how some of us have ended up with 30 grape vines on the side porch, not that anybody is naming names.)

Eventually, the house is just one large flat of seedlings, and outside are row upon row of small pots with baby plants in them. Roommates, neighbors, passing firemen are all recruited to help water the little darlings because the cause of all this chaos has waddled off 250 miles to the South for the winter, like some sort of low-motivation migratory bird.

This is the problem with plants.

Back in April, when I planted those baby grapes, I received numerous death notices from various friends who either grow their own table grapes or even have a small wine producing effort. They'd be dead within a month, some said; others gave them as long as three months.

Since that time, I have had exactly one death, and I think that one got eaten by the neighbor cat who hangs out on the side porch. I did have to move the grapes outside, because they were fostering flies and it was unbearable, and also because the damned cat was trying to eat them and getting into all sorts of trouble.

Saturday afternoon, I repotted a bunch of them to one-gallon pots, where they should be fine for a while. Most of them were seriously root bound in the 4" pots, and also they'd grown together into a big mass and coiled around one another, so I had to put an end to that, too. 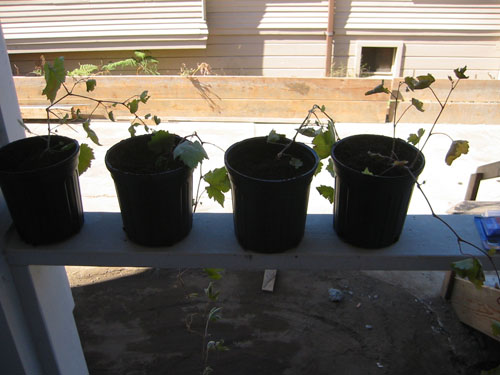 I also repotted the brugmansia cutting, which had grown to great size unnoticed in the kitchen window (I think it will have to move soon). I had to move the brug from the top of the dryer because the cat discovered it and was chewing on it (note leaf damage to lower leaves) and the hallucinogenic results had her sitting with one eye dilated and staring at her reflection in a picture glass upstairs. It was weird, so we got the brug out of her reach. 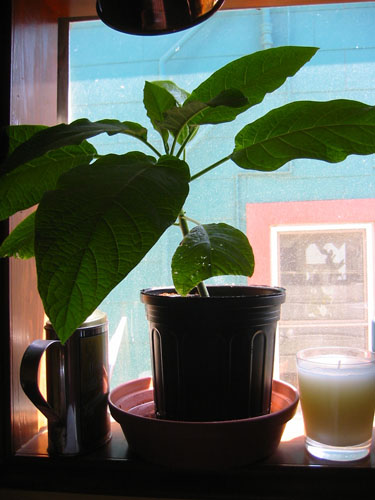 On Friday night, after I got home, I potted up some callistemon cuttings and a bit of fern I'd dug up. I have three callistemons, and I'll probably only want one of them, so I have room for the inevitable moment when I forget to water the things and they keel over dead. We're putting in a fern garden in the alley, so having some on hand would be a good thing. I'm also thinking of doing some spore collection and seeing what comes up. 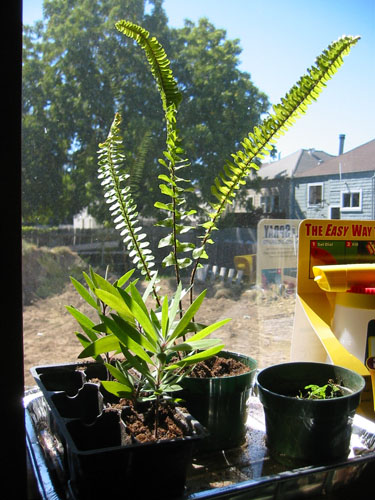 I also started a bit of an experiment. I gathered seeds from the amaryllis belladonna that our neighbor planted along the driveway, and planted them in this tray. Amaryllis doesn't start easily from seed, and usually it's propagated by division of the bulbs, but I figured it would be interesting to see if they would sprout and turn into little plants. If they do, it will be at least three years before they flower, but what the heck. 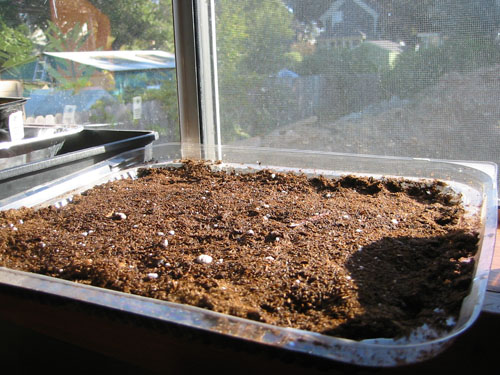 After what was not entirely as relaxing a summer as I would have liked (I'd been hoping to spend it gardening, after all), I am back in school. With what feels like a ridiculously easy schedule, though I'm sure I will be more rushed as the quarter progresses.

This is my schedule (because I know you are all on the edge of your seats): 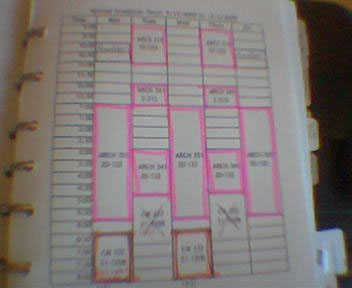 My earliest days, Tuesday and Thursday, start at nine. My latest days start at one. If it were possible with the sun shining right on my face, I could sleep until noon those days.

Of course, my late days end at eight, so that sort of takes the fun out of it.

The big excitement of this quarter is that I was required to purchase yet another programmable calculator. So in addition to the TI-86 that comes with me everywhere and sleeps beside me at night, I now have a TI BA-II plus, which is to say a financial calculator, for my construction finance class. 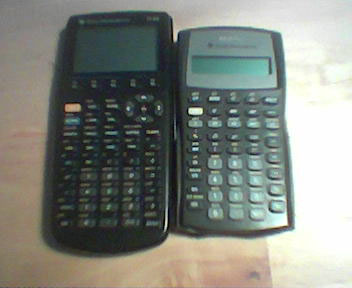 Because I can't get enough of changing batteries, apparently. (Noel tells me the battery in the BA-II plus will last all quarter, but I go through four to eight AAA batteries a week in the TI-86, so I am skeptical.)

Another excitement is that in my engineering class, we were issued our own copies of the Manual of Steel Construction to use all quarter long. This is a ridiculously expensive book, if you're an architect. Engineers should just buy the thing because they will use it until it falls apart and then they're going to want another one, so the $200 or something is worth it. Architects can borrow one from an engineer friend the five times in their careers that they ever need it. So it was nice to get a loaned one from the school rather than having to do homework in the library. 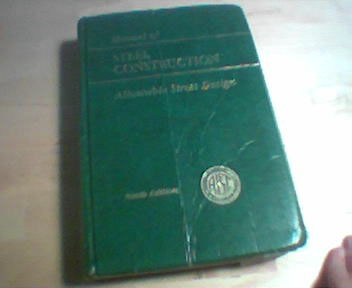 This is the sort of thing in the steel manual: lots of formulas and tables of values for sizing steel members and doing load diagrams and all sorts of other wonderful engineery things. Don't you just want one of your own? You know you do. 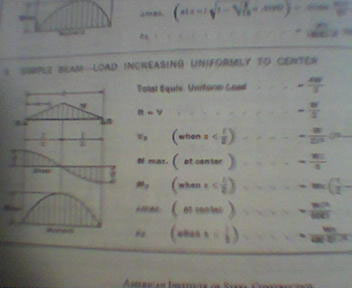 (Actually, I have to admit that if I ever found a copy of the ninth edition in a book store for a reasonable amount, I would be tempted. But then again, there was a reason why I chose a program that was so tightly integrated with an engineering program.)

I was too tired last night to upload these photos, so today you get to see the results of a long day of driving.

First we have the obligatory view of Mt. Shasta. It's got the postcard quality to it, where when you look at it you think you're looking at a postcard or something.

Oddly, the other side had much less snow cover, but there was no good place to take a picture for comparison. 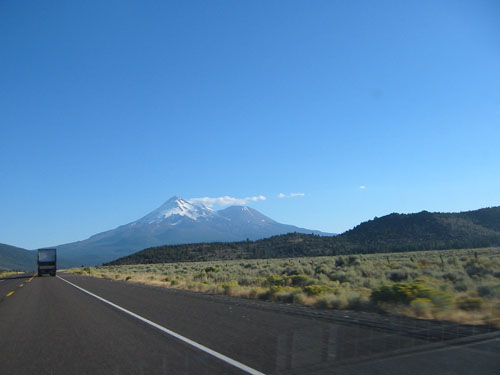 Now I give you: Goldie saying hi 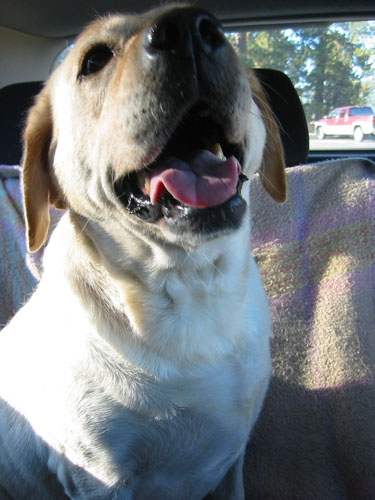 And Goldie snoozing in the car. I wish I could convey to you the extent of the stress farts, without which this photo looks merely cute and adorable. 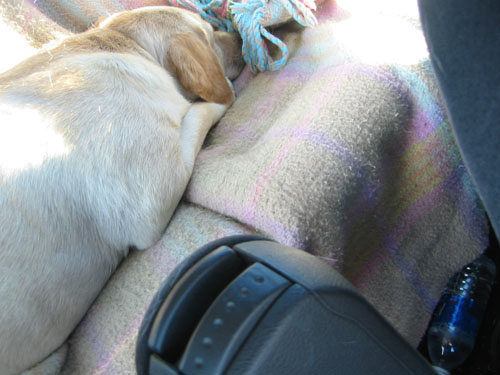 Since we got back to the US, my life has been a long dog-related adventure.

First we drove, deeply jetlagged, up to West Sacramento to pick up Rosie from Dog Camp. Then this morning I got up extra early and drove to Klamath Falls, Oregon, to get Goldie, the New Dog.

It was a long, stress-fart-scented drive home. I give Goldie full props for being really good natured for the whole thing, given that I just sort of showed up and took her. But every hour or so she would get terribly restless and I'd stop to give her a run around out of the car, which she really needed. She also took well to big hugs. I'm sure it doesn't help that she's just weaned her puppies and is shedding like crazy and sort of hormonal.

Anyway, she is now crated and barking her head off in dissatisfaction at that state. But she was so stressed out by the house (and learning about staircases!) that I didn't want her to go into overload. In a minute I will be joining her (in the bedroom, not in the crate) because I'm really really tired.

Actually, as soon as she's quiet for five minutes I may take her outside to be sure she doesn't need to use the yard (not sooner, or she'll learn that barking gets her out of the crate). She had a drink of water and a little bit of peanut butter, but was uninterested in dinner.

I usually overestimate the intelligence of the American people. This is why I don't understand how reality TV can spawn sequels, much less attract advertisers. But I was unaware that more than half of Americans have a basic misunderstanding of some really simplistic science stuff. That's right, most Americans don't believe in evolution (or don't know, which is basically the same thing when you're talking observable phenomena). That's like not believing in gravity, which is also "just a theory" for those who failed to pay attention in sixth grade when they told us what the scientific method was and what terms like theory and law actually mean.

Maybe we should make a reality TV show called, "America goes back to the sixth grade," in which we have talented science and math teachers explain things like experimentation and statistics to the vast majority of people who apparently haven't cracked a book other than Harry Potter since they were twelve.