I was ordering an item on Amazon, and in doing so it occurred to me that I could probably easily afford to buy everything on my cough extensive cough wish list that was selling used for under $2. So I just did. And the total order was under $200, $50 of which was the stuff I had to buy, anyway. It was 25 books, altogether, and some of them ones I've been wanting to read for a while.

It kind of sucks that Amazon has dropped the bottom out of the used book market, because I have a huge stack of books I want to sell and seem unable to do for any reasonable amount, but at the same time, this is definitely a boon on the purchase side of things.

In order to distract ourselves from the overwhelming anxiety of the quagmire, Noel and I have been obsessively redesigning rooms in the house. Most especially the future bathroom under the stairs, and the upstairs bathroom (which was disconnected during the foundation work).

So after work today I made a brief stop at Expo, to check out some faucets and shower controls I'd been looking at in online catalogs. What I found was deeply disturbing.

For one thing, that dolphin looks angry. For another, it looks like you could seriously hurt yourself on this thing during a slip-and-fall incident. Imagine dying by being impaled on a dolphin faucet. The only thing more embarrassing would be admitting to your fellow dead people how much you had paid for the thing in the first place. It's in the four digits, folks. 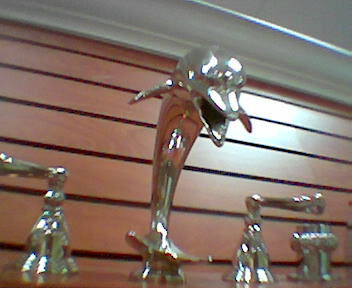 If dolphins are not your style, there are a host of other creatures you can get your water from, such as swans 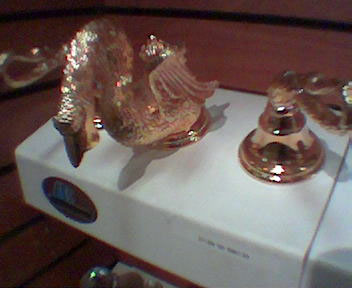 Or disturbing dragon things that may be intended to be goldfish or something more benign. 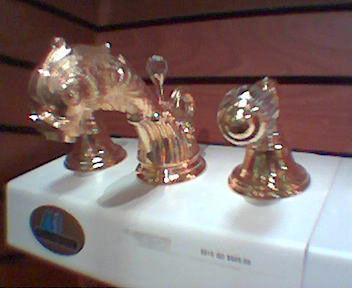 It won't work in our space, but I have to admit I found this beetly faucet kind of cool. 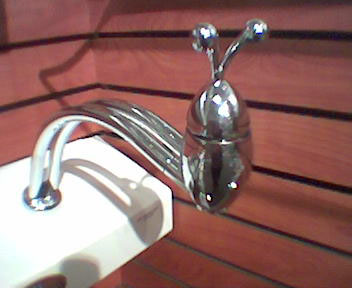 Yeah. Anyway, I decided on ultra-modern for the powder room, and Edwardian scientist for the upstairs bathroom (think all kinds of knobs and valves and protrusions of gleaming metal). But those are not nearly as exciting as killer dolphins.

A recent development in the saga of the baby grapes: Downy Mildew! Yes, this fluffy stuff is all over some of the leaves. Looking online, I see that causes are generally being in a damp place (which the laundry room certainly is) with poor air circulation (which the laundry room generally has). The cure is spraying with a fungicide, so after an appointment this afternoon I will be purchasing some of the stuff (mmmm...toxins!) and seeing how well it works.

In theory, the mildew only kills the leaves it's on, but the plants are so small that I want to save as many leaves as possible. Also, we're more than five years from first harvest, should they last that long, so I don't feel too bad about using a toxin on them. 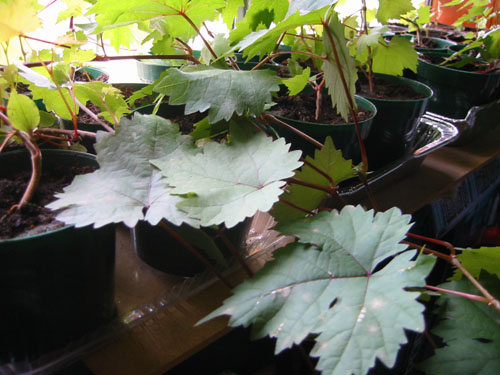 The tray of small babies is still struggling, though there's one guy in there who seems to be doing better than the others. 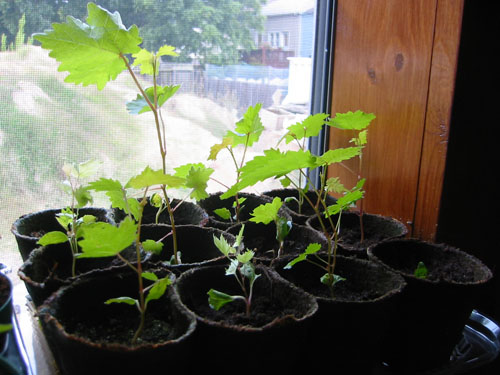 As for the first-germinators, apart from the Downy Mildew, they are doing fine. We might have to re-pot many of them soon. Maybe I should get some gallon pots and wood for stakes while we are buying fungicide. 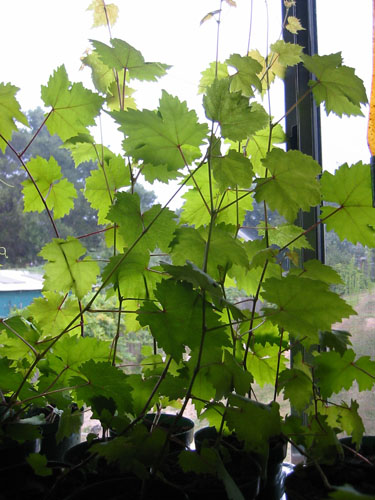 I re-enabled comments. Glad to see that made so many of you happy. However, I've got comments set to be pre-screened, and unless you give me a VALID e-mail address, and yes, by valid I mean one where I can send you an e-mail and you will respond to me, I'm just not going to put your comment up. Don't give me that BS about spam -- I don't post e-mail addresses, and I don't spam or sell addresses to spammers. They are for my own assurance that you are who you say you are, and because it's a policy I'm enforcing it uniformly, no matter how benign the comment might be. I don't think it's too much to ask that commenters identify themselves at least to me on my own website.

So thanks for all the comments. Consider sending me e-mail telling me who you are so I can actually post them here.

I upgraded Movable Type, the software that I use to handle the data on this site. This is part of my grand effort to fix my broken comments, and I am almost there, except that my preview template is broken. But you can now post comments, as long as you're OK with not being able to preview them.

Because of the massive amounts of spam, all comments are screened before posting. And I need a valid e-mail address, which will not be posted online. I don't think that's an unreasonable requirement, but just FYI, those e-mail addresses will never be rented or sold or whatever people do with data these days. They're basically there to give me a way to contact you.

It was inevitable, as the grapes began growing more vigorously, that this title would appear. It's been a hearty week in the laundry room, with baby grapes entering the terrible twos and cuttings taking root.

The older, more vigorous grapes are completely out of control. They have grown into the fly strip and been peeled off many times, they are tangling their grasping tendrils around one another, and I actually can't tell which stems and leaves go with which pot of roots. It's insane. 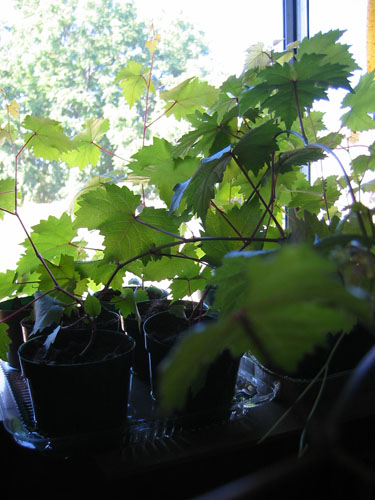 The smaller grapes are actually doing OK, too, although I have my doubts about them taking off like the larger grapes. They just seem to have the "grow slow" gene or something. 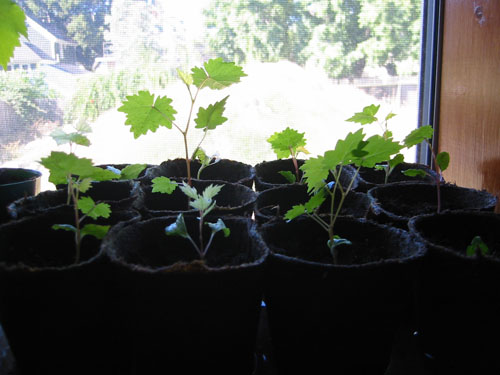 The brugmansia cutting finally took root, and its leaves perked up instantly. I was a bit concerned, even though brugmansia are known for being easy rooters, because it seemed to be sagging so profoundly. But it is standing on its own power now and the leaves are firm and healthy. I'm guessing that in a year it will be ready to be planted in the ground. 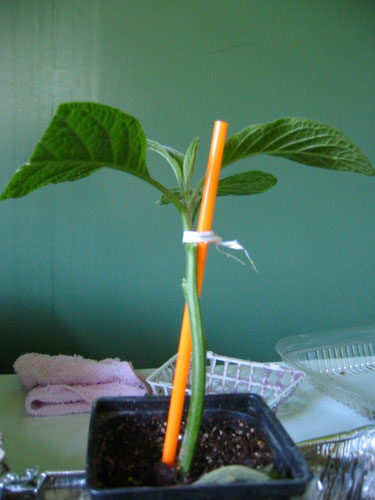 I've also got some baby ferns that have started to grow nicely, if not as fast as I'd prefer. So when the foundation work is done, I'll have a yard entirely filled with grapevines, a couple of ferns, and a weensy brugmansia. Olmstead would weep with envy, I tell you.