We're off in snowy, fluffy Minnesota with Noel's parents, and there is snow everywhere. Yesterday we drove up to visit his grandmother in New York Mills, and it was threatening snow the whole day. Almost as soon as we got home again the storm hit. It's a big, fluffy, picturebook snow. 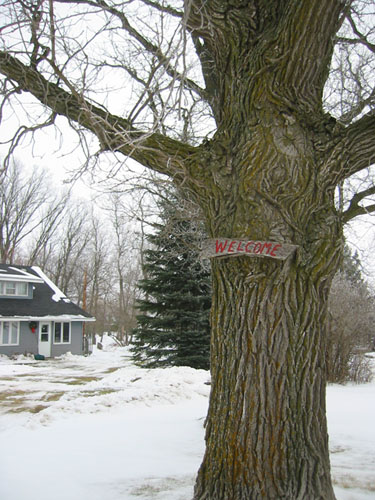 On the drive up we saw this place: the Dandy Fun Factory. I have no idea what they make there, but I have to admit it doesn't look very dandy or fun.

Noel's grandmother has a new puppy, a beagle/bulldog mix named "Butch." He has a lot of energy. We taught Butch how to sit and lie down, and not to jump on us. 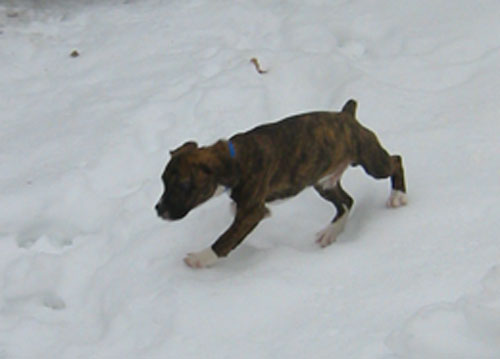 As we were driving home through the farm country, we talked about how this was what Noel thought of when he thought of the midwest: roads through endless fields. 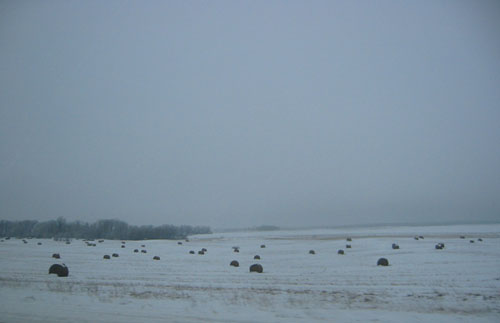 The scenery is actually a lot like where I grew up in New York, only flatter, as if somebody grabbed the edges of the world and pulled it taut. 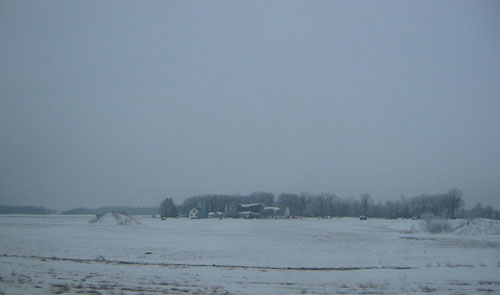 The storm was starting to get going off in the distance: we were really lucky that we missed driving in it. 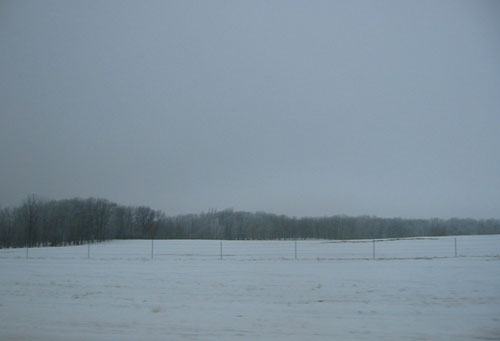 One of the things I love about small towns is the small town Christmas decorations. They don't seem as overblown and corporate as what you see in big cities, where they hired a decorator to coordinate them months in advance. And because of that they seem more sincere. 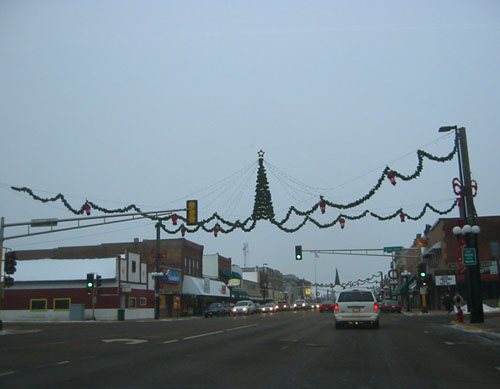 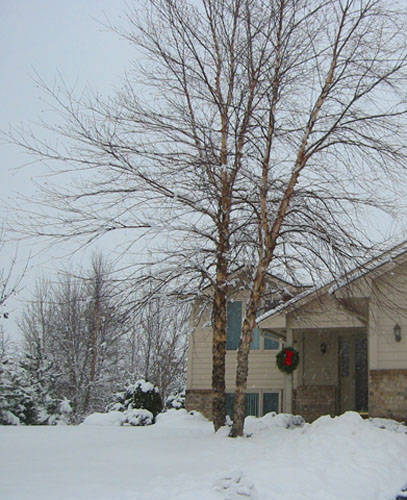 This afternoon I went out for a walk and took some pictures of the snow. It's sitting nicely on the trees. 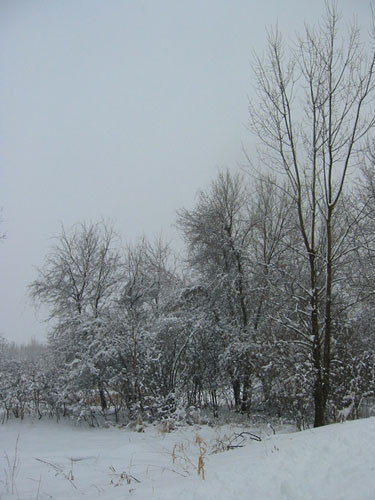 The problem with snow is that it so rarely stays this pretty. But I figured I would enjoy it while it is here. 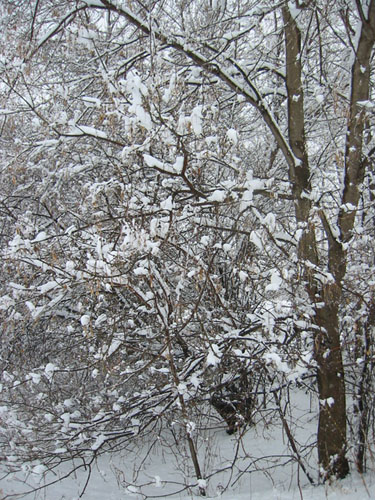 Something I'm Not Understanding

I must be missing something somewhere, but I keep reading articles about the iPod that say things like "well if you want unlimited music, no version of an iPod will work with that."

I have an iPod. Actually, I have two iPods, though one is mostly used as a data storage device. I put my music on them, I can take it off (well, remove it; actually moving the files from the iPod back to the hard drive on the computer is more complicated, though possible). There are no limits on this. Sure, we had to rip all our CDs to MP3, and that took a while, but using them on an iPod doesn't change that, and if it did, we could restore them by, well, re-ripping the CDs.

An iPod is not the iTunes Music Store. You do not have to use iTunes to fill it with music, though if don't own any CDs you want to listen to and you're not into buying albums, that might work great for you. For me, not so much. I'm a big fan of the album. Back when it was possible to search the net and listen to music other people had mentioned or I thought I vaguely remembered liking when I was 14 without being sued into poverty by the RIAA, if I liked the song I would still delete the (usually badly ripped) MP3 and buy the album. I'm old fashioned that way. Nowadays, the whole idea of subscribing to a music service with "unlimited" music available is unappealing because ninety-nine percent of what they have there is not of interest to me -- I either already own it or don't care for it. It's like a vegetarian going to an all-you-can-eat steakhouse. Kind of a waste.

I guess the big difference between me and those guys is that I use my iPod to listen to my music, not to buy music. I own hundreds of CDs already, and I'm not a huge consumer of music any more; the tactics used by record companies in recent years offend me. And the music available online through these music stores is still produced by those same guys, which is why it comes with lots of entanglements in exchange for the lower price; even on the "unlimited" services. So I've really stopped spending money on music lately. Not that anybody seems to care, of course, but at least I feel better.

Plus, now that I've found that podcasts of NPR shows (not to mention BBC, ABC [Australian Broadcast Company], and CBC podcasts), the shows I download use up all my listening-to-anything time. I can't listen and design at the same time, can't listen and write, or listen and do engineering calculations. I don't feel any need to have a constant soundtrack to my life. That leaves me my daily exercise walk, driving between the Bay Area and SLO, and occasionally an evening around the house. I also listen to radio shows when I'm slaving away over a model in the studio, or while drafting. I hardly ever listen to music any more, and when I do, it's one of the albums or playlists I already have. My old friends.

So I don't get how limiting an iPod is supposed to be. I have more stuff than I can listen to: I often have to go through and purge things I won't have time for or that don't quite make the cut any more. Even if I were listening to music all the time, I have enough music on my iPod to last more than a month without repeats. Noel and I did the iPod challenge on our cross-country road trip in 2004, letting it randomly select from the entire body of our shared music collection while we drove from California to Maine and back. That barely touched ten percent of the music there; since then I have deleted a lot of horrid folk music of his to make room for more of my stuff. I also have more than 24 hours worth of podcasts (Forum is two hours a day all week, so it piles up fast) on the iPod, and more than a week's worth of podcasts waiting to be put on the iPod when I've listened to what's there. None of this is bound into a DRM system that keeps me from putting it on any MP3 player I want.